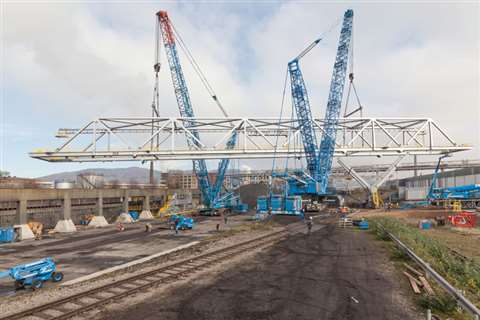 This year celebrates the 20th edition of the IC50 ranking of the world’s largest crane-owning companies. IC reports

The upward trend of the crane industry continues this year running, with an 11.8 % increase in the total IC50 Index figures for the top 100 companies. This increase from last year’s 7 % rise is partly down to a number of acquisitions over the past year. As a result of some of these acquisitions, some of the 2015 IC Index figures are combined entries which have been listed both inside and outside the top 100 over the past few years.

Despite listing fewer units and recording a 3.2 % decrease from last year’s result, Mammoet retains its top position with a total IC Index figure of 2,506,496. Sarens is slowly gaining ground, however, after reporting a 4.5 % increase in its 2015 figure with an IC Index of 2,100,240. ALE has also shown a rise in capacity and, with a 1.2 % increase in its final figure, it has retained its third place listing.

Elsewhere in the top ten, Maxim Crane Works has moved up two places, as has Sanghvi Movers, reporting a 19 % increase bringing its total IC Index up to 620,000. Tat Hong, based in Singapore, has remained in seventh place, while other companies, including Lampson International and All Erection and Crane Rental, have dropped positions to fifth and eighth, respectively displaced by Maxim Crane Rental and others moving up the list. Deep South Crane and Rigging has moved up three places this year with a 19 % increase in its IC figure from 347,454 to 413,795. The company based in the USA has increased its number of employees, mobile and lattice crawler cranes.

Moving out of the top ten this year to 11th position is Al Jaber Heavy Lift, based in the UAE. Austria-based company Prangl has also lost its top ten spot, falling from 9th to 12th place following a 5 % decrease in its IC Index.

Moving into the top 50 this year is W.O. Grubb, jumping to 45th place following a 74 % increase from 66,717 to 116,289 in 2015. Moving out of the top 50 this year include Crane Rental Corporation, Franz Bracht Kran-Vermietung and Gruas Roxu, which are now in 51st 52nd and 53rd place, respectively. Crane Rental Corporation next year may well be included as part of new owner Maxim Crane’s fleet. Moving out of the top 100 listed companies this year is Australia-based Boom Logistics, which has moved from 44 to 104 following a reduction in its fleet.

New to the IC Index this year is Sinopec Heavy Lifting and Transportation, based in China, which entered the list in at 15th place with an IC Index of 294,575. The company is China’s National Oil Company with a large fleet of equipment used to construct its own new facilities that is now available for general rental. The largest lattice crawler in its fleet is a 4,000 tonne capacity XCMG XGC 88000. Bin Quraya, based in Saudi Arabia, is also new this year, entering the table in 112th place with an IC Index of 21,017. Strele Logistics is the other new entry this year, with an IC Index of 11,020, positioning it at 143th place.

The 2015 total for the full IC50 is 205 companies (with space for the top 122 of them in the magazine). Ten companies have been removed from the list since last year’s listing, for reasons of consolidation by acquisition, insolvency, and - or lack of data.

As understanding and implementation of the tonne-metre rating system works its way through the full table, a small number of companies, as in previous years, have majorly different IC Index figures from the year before as a result of adjustment in the calculation to better reflect the capability of the fleet. Most of the companies are outside the top 100 and the transition is almost complete.

The IC50 table is printed in the June issue of International Cranes and Specialized Transport on page 15 and can be seen here.

Look out for an IC50 special report in the 2015 IC50, including the full table of all completed entries, available at: www.khl.com

Other interesting points from this year over last are that the total capacity of the largest cranes is the same as the year before but up 5 % since 2009. The number of employees in the 2015 Top 10 Index is up 2 % or just over 400 people more than last year.

Companies are ranked by their IC Index, calculated as the total maximum load moment rating, in tonne-metres, of all cranes in a fleet. All companies in the list, plus other prospective ones, have the opportunity to supply fleet information and other data for inclusion in the ranking. Where companies supply the full data the figure used is calculated by them. Where companies supply a full fleet list with all the relevant details we can calculate the IC Index on their behalf., In a few cases, where no data is submitted, or is incomplete, we may base a company’s equipment fleet figure on IC estimates. Various sources are used for this and include industry contacts, information submitted in earlier years and delivery and used equipment sales data. In cases of insolvency, acquisition or a basic lack of new information, companies are withdrawn from the table.

While we make great effort to ensure the accuracy of information provided, it cannot be guaranteed and IC accepts no liability for inaccuracies or omissions.

The IC50 Index will next be updated in the first quarter of 2016. If you think your company should be included please contact IC for an application form. Note that tower cranes are not in the main IC50 table here because, already for several years now, they have been appearing separately in the special IC Tower Index in the September issue of IC. Similarly, specialized transport equipment is also in a separate ranking, the IC Transport50, which has been published in the August issue of the magazine for more than ten years.

The World Crane Report is a global analysis of fleets, trends, financials and economic fundamentals. This 72 page KHL Executive Report is the most comprehensive of its kind ever produced for the global crane sector. Broadly split into two sections, it looks at both the long-term trends for crane owners as well as those for crane manufacturers. It explores the links between the industry and the broad economic picture, providing new insights into how fundamentals such as GDP growth impact on crane manufacturers, buyers and end users.

The World Crane Report also includes unprecedented analysis of the global crane fleet – its total size (number of cranes), their capabilities (load moment and lifting capacities) and the changing preferences for lattice crawler versus wheeled mobile cranes. These trends and others are plotted over a ten-year timescale, with analysis not only discussing obvious changes in the industry – the move towards higher and higher capacity cranes among the world’s largest rental companies, for example – but also analysing regional differences between Europe and North America.

For further details on the World Crane Report see: www.khl-infostore.com/world-crane-report