Indian rental company Mtandt Group has ordered 210 aerial platforms from Chinese manufacturer XCMG in an order worth US$6 million. The deal was signed on the second day of the APEX Asia show in Shanghai.

Rakesh Modi, Chairman of Mtandt, said the company had already worked for several years with XCMG’s fire fighting equipment division – selling several of its large truck units in India – and was now investing in its self-propelled machines. 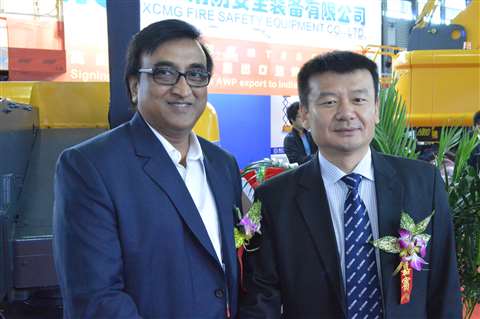 The deal is for XCMG’s 20 m articulated booms, 24 m telescopic booms and 12 m and 14 m scissor lifts, which will be delivered over the coming six months. Mr Modi said after sales service on the machines would be provided by Schwing Stetter’s Indian operation. Schwing Stetter is the concrete pump supplier that was majority acquired by XCMG in 2012.

The company has been investing in other new machines from JLG, ATN and Skyjack, favouring XCMG’s machines under 80 ft and other suppliers for larger or more specialist machines, such as JLG’s electric booms.

The addition of the XCMG machines will increase Mtandt’s aerial platform machines to more than 700 units.