Rolls-Royce Power Systems on the up

Revenue, margin, profit and order book are all reported to have risen in 2017 at MTU engine manufacturer Rolls-Royce Power Systems (RRPS). 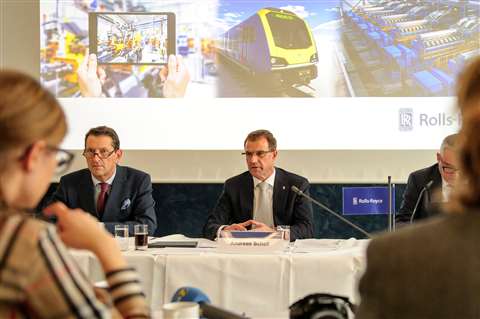 CEO Andreas Schell said, “Rolls-Royce Power Systems delivered a strong performance in the financial year just ended, and has held its ground well against the competition.

“We have achieved a turnaround in terms of revenue, profit and order intake, a major contribution to this being made by our RRPS 2018 business transformation programme.”

With this result for 2017, the Power Systems division with its core brand, MTU, accounted for 19% of the total revenue generated by the Rolls-Royce Group and was therefore once again the second strongest revenue driver in the group, which in 2017 was organised into five businesses.

Marcus A Wassenberg, chief financial officer at Rolls-Royce Power Systems, said, “The year 2017 has put us back on track for success.

“We benefited on the one hand from the growing market and the good performance of the global economy. What clearly contributed to the excellent result was the fact that, with our RRPS 2018 transformation programme, as a result of optimising costs, service and sales, we were able to significantly improve our profit situation.”

The company said its service initiative had born fruit in 2017 – total service revenue was up 6%, thanks primarily to its business in MTU Reman engines and services provided for the invigorated oil and gas business in the US.

One third of the total revenue of Rolls-Royce Power Systems in 2017 was again generated by the energy sector, which continues to be a viable future business field. Additional growth was achieved primarily in diesel systems for emergency gensets, for example for data centres in China and the US.

Business in medium-speed engines manufactured by its subsidiary Bergen Engines stabilised in 2017, principally as a result of orders for the delivery of power generation systems together with the associated service.

RRPS said that sales of engines for the construction, agricultural and industrial sectors increased significantly in 2017. The further development of engines in the lower output range in anticipation of the EU’s new Stage V emission standards scheduled to come into force in 2019 resulted in large-volume orders, it said.

Schell said, “In the 2017 financial year, we made considerable progress on our way from being purely an engine supplier to becoming a solutions provider that supplies its customers with drive and propulsion systems, and their permanent availability.”

Since last year, RRPS has provided its customers with support from experts in its new Customer Care Centres in three different time zones. New digital tools, such as MTU’s GoAct app or MTU’s GoManage internet platform, are designed to improve the quality of service provided. They are being developed by an in-house digital unit set up in 2017.

Looking at the future, Schell said, “For 2018, we expect the present healthy, dynamic performance to continue – we aim to achieve further growth, but we intend to maintain our flexibility and continue to rigorously implement our business transformation programme. This is due to the fact that we are dependent on volatile end markets.

“Our agenda includes consistent digitisation specifically for customers and service, in addition to the electrification of our drive and propulsion systems.”

He added that 2018 would also be an important year for its new partnerships in Asia, which would enable the company to increase its production capacities and market access in key focus markets.

“This means we now have engine and system production facilities in three major regions – Asia, America and Europe,” he said.