Road building: ahead of the curb 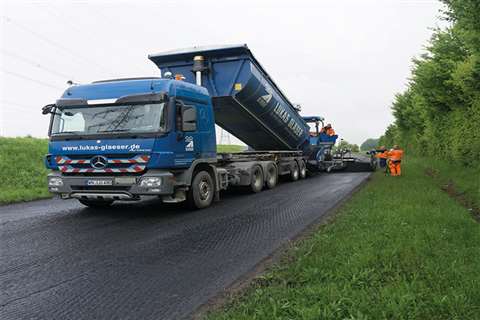 Along with the usual challenges posed by weather, logistics and cost pressures, roadbuilding also faces a growing number of planning and documentation requirements introduced by lawmakers and clients. In response to this, companies are increasingly turning to information technology to help streamline the roadbuilding process.

For a road project on the K2081 in Germany, construction company Lukas Gläser decided to use business process outsourcing (BPO) software from Volz Consulting after conducting a successful pilot project with the technology.

The pilot project was carried out over several days with the aim of seeing how the site could be planned digitally and the job could be controlled by means of a real-time model in order to optimise the logistics.

The required quantity of asphalt was predetermined, then the logistics were planned and the fleet requirements calculated based on the time allotted for installation.

One of the greatest advantages of the digital solution was said to be the automated calculation of things such as material consumption and the forecasting of the construction process.

The system was put to the test when the asphalt production was delayed at one point in the process. Lukas Gläser used BPO Live System’s algorithms to adjust the plan, and within a few seconds the loading, unloading and installation times were automatically adjusted and, at the same time, everyone involved in the project was updated via their smartphones. In this way, digitalisation made the planning process faster and the construction process more transparent.

This was true at Frankfurt airport, where Topcon’s SmoothRide 3D technology was used to resurface a 1.4km-long and 31m-wide strip of the west runway in just five days and six nights.

Strabag, the contractor responsible for the works, was faced with particularly tight time constraints since it is the busiest runway at the airport and high traffic during the day meant that milling could only be conducted at night.

The process began with a survey of the area, which was conducted using one of Topcon’s RD-M1 scanners attached to the back of a vehicle. It took about three hours to scan the 45,000m2 area in 2cm resolution, providing an accurate model of the runway.

The point cloud generated by the scanner was transferred first to Topcon’s Magnet Collage software for processing and then to the Magnet Office Resurfacing programme, which was used for the actual planning. The data was then transferred to the milling machines.

By milling with variable depth, the milling machines could be guided by the 3D model to adjust the depth to which they were milling, taking out only as much material as was necessary. In this way, an even surface could be obtained in a single pass, meaning less time was taken and the machines sustained considerably less wear. In total, approximately 16,000 tonnes of asphalt were removed. 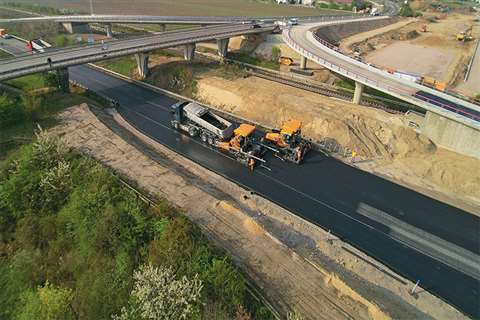 Elsewhere in Germany, new technology from Joseph Vögele has been successfully used to simplify the transfer of mix between feed vehicles and pavers.

For the modification of an exit road on the B271 federal highway, PaveDock Assistant was installed on a Super 1800-3i paver to simplify communication between the paver operator and the drivers of the feed trucks.

Operated from the ErgoPlus3 console on the paver, it worked on the principle of two signal lights that were used to indicate whether the feed lorry needed to reverse, stop, dump or drive away. The signal lights were positioned high up on the hardtop of the machine so that they could be seen easily by the lorry drivers at all times.

A key advantage of the system was said to be the fact that it eliminated the need for operators to use their horns to communicate, which is a widespread practice that is not only unreliable but can also annoy local residents and confuse vehicle drivers.

It was reported that the feed lorries did not cause a single jolt on the B271 job site during docking, which could otherwise have affected the screed and left imprints on the freshly-paved asphalt course.

New technology is also being used to improve efficiency and decrease downtime on the $2.3 billion reconstruction of part of Interstate-4 in Florida, US.

Flagler Construction Equipment, the Volvo Construction Equipment (CE) dealer for Florida, has been using Volvo CE’s ActiveCare Direct (ACD) service to help manage the fleet of 70 Volvo excavators and rollers that it has working on the 34km stretch of road. ACD was said to provide actionable alerts that keep the company’s machines working consistently hard.

For customers in North America, ACD uses Volvo CE’s telematics system, CareTrack, to capture thousands of machine data points and send them, along with real-time machine alerts, to the Volvo CE Uptime Center’s fully automated Case Management System in Shippensburg, Pennsylvania. At the centre a team of data analysts and a proprietary system monitor and analyse machine health in real time.

This system has been informing Flagler about machine alerts and what actions are necessary to address any issues before significant downtime or failure occurs. So far with the project, Flagler said ACD had helped it to reduce on-site visits for repairs and maintenance by 20%.

Elsewhere in the US, a 32km section of Interstate-93 between Manchester, New Hampshire, and the Massachusetts Stateline is being widened from two to four lanes in each direction, at a cost of $750 million.

With responsibility for completing the last 19km of paving, US-based Continental Paving is carrying out a range of tasks including reclaiming, milling, on-site crushing and asphalt paving.

The company’s work is divided into a number of contracts, one of which is with US-based contractor Audley Construction to lay approximately 130,000 tonnes of asphalt.

Amy Charbonneau from the company said, “We have used our Roadtec Stealth Paver with a Carlson screed for 90% of the work on the project.”

Roadtec’s RP-100e Stealth Paver is designed as a low-maintenance gravity-fed paver to be used in tandem with a material transfer vehicle. 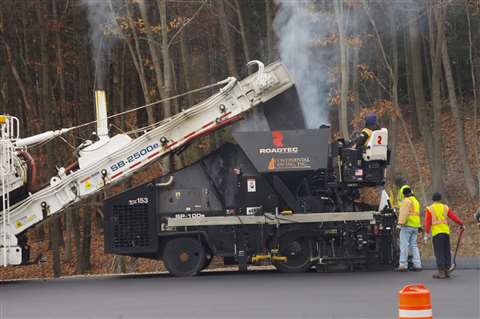 Roadtec’s RP-100e Stealth Paver in action on Interstate-93 in New Hampshire, US

Continental Paving has been using a Roadtec SB-2500e Shuttle Buggy material transfer vehicle with a 22.7 tonne capacity to pair up with its Stealth Paver. The Shuttle Buggy stores and transfers hot-mixed asphalt material from a truck to the paver for continuous paving.

Charbonneau said, “We see that the Stealth is saving on fuel cost and the paver is going to save us approximately 50% in wear part replacement cost on a yearly basis, due to the reduced number of moving parts on the machine itself.”

The recently-completed Devil Dog project on Interstate-40 in northern Arizona, US, was the first major project for GOMACO’s new GP4 slipform concrete paver.

The Arizona Department of Transportation chose RGG United as the main contractor to do the concrete slipform paving for 8km of the road’s eastbound lanes.

John Kliethermes of RGG United said, “This stretch had grades up to 12% incline and decline, so it was a unique project climbing up and going down. The GP4 handled it well going uphill and pushing the concrete.”

The Arizona Department of Transportation offers an incentive bonus for smooth pavement, for which it uses a profile index with a 2.5mm blanking band to measure smoothness. For this project, this degree of smoothness was achieved on everything the GP4 paved, earning RGG United a $70,000 bonus. 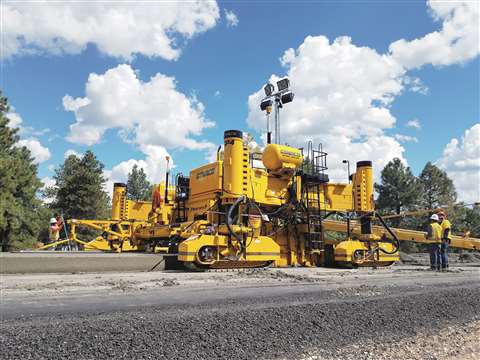 The paver has also been engineered to be easy to transport, and the G+ Connect closed-loop control system allows all the smart accessories and guidance systems for the paver to be easily interfaced.

The roller features a modular, easy-load ballasting system that allows a range of ballasting materials – including water, steel, concrete and sand – to be used to adjust the machine’s weight from 9 to 28 tonnes in an hour with the help of just a forklift truck. This translates to a load-per-tyre adjustment from 1.125 to 3.5kg.

The machine’s air-on-the-tyre system allows easy control of tyre pressure from the cab, and the front isostatic axles with oscillation were said to offer good stability and surface coverage. The front tyres are connected with an isostatic system that allows movement of plus or minus 50mm, and the front axle configuration combines with plus or minus 3° of oscillation for optimal tyre contact in difficult terrain.

The PSL50 and PSL120 models are designed for use with Bobcat’s high-flow compact loaders. The 50cm-wide PSL50 model offers the same features as the existing 60cm-wide PSL60 model with self-levelling, side-shift and tilting, but the size of the PSL50 planer was said to be particularly well suited to the various requirements of fibre optic projects.

The 120cm-wide PSL120 model has the same features as the 100cm-wide PSL100 model and was said to be ideal for road maintenance, where the increased width is reported to provide 20% more productivity. Both planers are fully hydraulic so that all their functions can be controlled from the operator seat. They are compatible with Bobcat’s water kit, which also comes in two new versions to match the PSL50 and PSL120.

Wirtgen’s new OCS, which is available on the company’s W 200i, W 200, W210, W 210i and W250i milling machines, is intended to maximise the productivity of the equipment by making sure the operator is comfortable. It features a hydraulically moving and swivelling cabin that can be adjusted to the optimum position for the machine operator to have full visibility of the work area.

The entire cabin can be moved hydraulically to the left or right edge of the machine chassis, and swivelled 110° in either direction. Furthermore, the cabin’s foot-well area has a glazed floor that gives the operator a direct view of the milling edge. In addition, six cameras are installed to monitor work progress and the images are displayed on two screens in the cockpit.

With the new 11.8-tonne CB13, 13.6-tonne CB15 and 14.5-tonne CB16, a number of technological enhancements are provided through the Cat Compaction Control option. For instance, the pass-count and temperature mapping systems combine infrared temperature sensors with GPS mapping to keep the operator informed about the temperature of the surface, the machine’s position, the pass count and the pass coverage. It was said to enhance night-time rolling pattern performance, as well as recording information that can be used for future process analysis.