The 85th Euroconstruct Conference was held in the Finlandia Hall, Helsinki, Finland

The public sector will continue to play an important role in housing and infrastructure investment, and in the face of increasing pressure on the public budget, innovative financial instruments could leverage public funding and draw investments from the private sector, according to European Commission vice president Jyrki Katainen.

Katainen, a former Prime Minister of Finland, leads the Jobs, Growth, Investment & Competitiveness project team at the European Commission, and he was speaking at the 85th Euroconstruct Conference in Helsinki, Finland.

He said that the commission had clear political guidelines that focused on 10 priority areas.

“Many of them matter for construction,” he said. “In particular, stimulating investment is a major priority for the EU.”

He said, “EU support alone would, of course, not be sufficient to close investment gaps in all areas. We need to mobilise the private investor. Without private engagement and money, we cannot achieve our objectives, and we must achieve a much higher leverage of public funds through wider use of financial instruments.”

Katainen, “The construction sector is at the very core of the modernisation of the European economy”

He explained that the European Fund for Strategic Investment (EFSI) addressed these investment deficits in the EU, using the EU budget in projects which were strategically important for the EU.

The investment fund has mobilised €290 billion in investments to date, according to Katainen, who said it was mostly private capital, out of a target of raising €500 billion by 2020. He added that almost 400 projects across Europe had been approved so far.

He said, “For the next budgetary period, which is supposed to start from the beginning of 2021, we propose to continue and scale up this kind of support in a single InvestEU fund.

Katainen told the conference that financing was not the only issue which had relevance for the construction sector, saying, “We also need to look at the business environment – at European level and also internationally.

“Two megatrends in the world economy in the coming years are artificial intelligence (AI) and the circular economy, and they both need to be looked at through the regulatory angles.”

He said that if Europe wanted to promote these two areas, regulatory changes needed to be considered to let them flourish in Europe.

He also mentioned smart buildings, and said that these factors were the reason that it could be expected that the construction sector should be one of the drivers in the years to come.

After the conference, Katainen talked more about artificial intelligence, saying, “There are two angles. The first one is to improve the smartness of buildings by using AI.”

Katainen told the conference, “There is an infrastructure investment need because AI will reshape the way we live in cities”

The second point, he said, was that, especially in urban areas, changes were coming about because cities used different ways of organising, for example, public transport and other public services.

“So there is an infrastructure investment need because AI will reshape the way we live in cities.”

On the topic of investment by manufacturers, he said there was no one way of achieving this because Europe was so diverse.

“There are more drivers in the construction sector now than was the case, let’s say 10 or 15 years ago.

“For instance, AI and everything that it enables for changing the physical environment in cities is one driver. Second, there is growing consumer demand for cleaner, low-carbon solutions on constructions.”

He said that the development of smart mobility, for instance, was very different between the various regions and countries, but that this was another driver.

“There are different kinds of drivers which are not happening at the same time to the same extent everywhere.

The conference heard that economic growth was expected to remain solid

“If 20 years ago there was a need for housing and a need for roads, now the drivers are more diverse.”

He said, “What the EU can do in this respect is to support innovations in the construction sector. It’s very important in order to achieve, for instance, climate targets and to improve productivity at the same time.

“The second thing is to provide financing to renew the existing building stocks to become more energy efficient, and this can happen everywhere – there is a need for this everywhere.”

The Euroconstruct conference also heard from Anni Sinnemäki, Helsinki’s deputy mayor for urban environment, who said that growth, as was being seen in the city, was a positive thing. 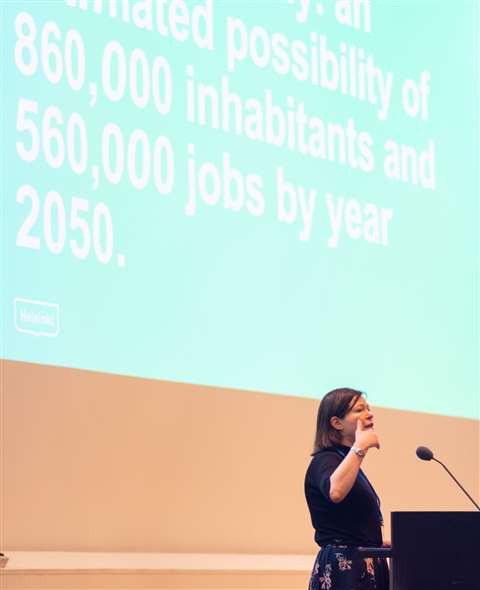 Sinnemäki, “We have to be faster”

A strategic master plan was formulated two years ago, with 5,000 homes to be built each year.

“Helsinki is different from rest of the country – there is minus growth in rest of country,” said Sinnemäki.

She added that construction offered challenges, for both newbuild and refurbishment. She said refurbishment was more complex and that it had to be considered whether the incentives were in the right place, and whether they should be stricter.

The main reason for the Euroconstruct conference was to look at the performance of the European construction market.

A research and consulting group, Euroconstruct was founded in 1975, and offers analysis of and forecasting for construction market trends in Europe. It has members representing 19 countries around Europe. Its 85th conference was hosted by its Finnish member – Forecon – and was held at the Finlandia Hall in the Finnish capital.

The conference heard that European construction was growing well on the back of low interest rates, good economic growth and “pent-up needs”.

Forecon said that economic growth was expected to remain solid, unemployment would decrease, exports would grow, interest rates would remain low and the confidence of consumers, and business and industry in the future was high.

As a result of this, tax revenue will increase, it said, allowing, for example, increasing investment in public construction, transport networks and other infrastructure. It added that urbanisation, immigration and internal migration, and ageing of the population were other important factors from the viewpoint of construction.

The Euroconstruct forecast at June 2018, suggested that European construction would grow 2.7% this year. It said the pace would slow down from last year’s 3.9%.

Growth will continue in 2019 and 2020, but at a slower rate, it said, adding that construction would “no longer be the European engine of growth”.

It pointed out that growth in European construction was broad-based and was seen in all main sectors – residential, non-residential and civil engineering, both new construction and renovation.

Despite growth, the volume of construction is below the 2007 level, said Euroconstruct.

“European construction has seen large fluctuations in the last 10 years,” it said. “After the financial crisis, construction contracted for five years and turned to growth in 2014.

“This is the fifth consecutive year of growth. As growth is expected to continue also in 2019 and 2020, the sector is in for a seven-year growth streak.”

Euroconstruct, “The volume of construction can be said to reach the 2007 level this year”

It said, however, that the rise from the 2013 low had been slow, and the volume of construction in the Euroconstruct area would still be 14% lower than in 2007.

“Considering the unhealthily high construction volumes of a few European countries before the financial crisis and the very powerful collapse, the volume of construction can be said to reach the 2007 level this year,” it said.

“A similar phenomenon has occurred in the US – a multi-year collapse followed by a long period of growth. There construction turned to growth in 2011 and will reach the pre-financial crisis record level of 2006 after a few years.”

The Euroconstruct forecast said that 2018 and the next two years would see the fastest construction growth in Hungary, Poland, Ireland and Portugal. It is predicting nearly 12% a year growth in Hungary, and 7 to 8% in the other countries.

It felt that growth would stop in the next few years in Finland, Germany and Sweden. 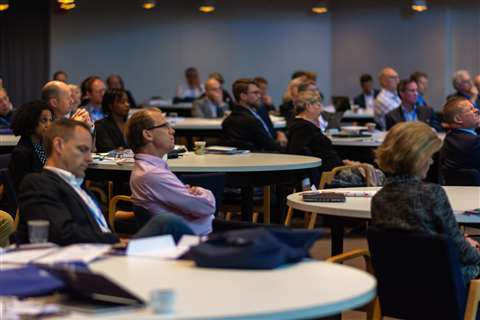 Sweden and Finland were responsible for the Nordic slowdown, according to the Euroconstruct Conference

It said that Sweden and Finland were responsible for the Nordic slowdown. In 2019 and 2020 the average growth was predicted to be somewhat negative in Finland and in Sweden, but would remain positive in Norway and in Denmark.

The next Euroconstruct Conference will be held in Paris in November 2018, hosted by French member BIPE.