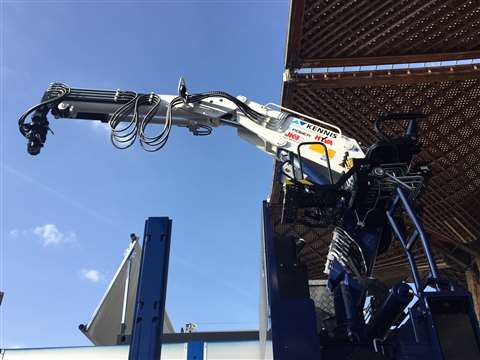 Crane manufacturer Hyva is offering an electric solution with its new E-Power crane.

The articulating boom truck mounted crane is offered in response to customer requirements and market trends for increased sustainability. To that end, electric power, rather than a conventional diesel engine, offers considerable benefits, Hyva said, including improved energy efficiency and lower environmental impact. There are no exhaust fumes and less noise.

The E-Power solution is on the Kennis Rolloader crane K14. Instead of a diesel engine driving an hydraulic pump the Kennis E-Power uses an electric motor with a battery pack, an electronic control system to optimise the power supply and a display showing the battery status.

In more detail it is an MRT Powertrain system from IET in Italy. It has a permanent magnet motor and a controller built with the latest generation of power semiconductors. IET also supplies the high density battery pack with thermal management for high performance and safety. Operation is possible with the truck engine switched off, making it suitable for urban areas, for night work and for indoor use.

“This E-Power initiative is an important step for Hyva in offering electric solutions” explained Marco Mazzù, Hyva CEO. “It recognises customer demand for electrically operated vehicles and is responding to increasingly strict environmental regulation on diesel exhaust emissions and noise pollution. We see several electrically powered vehicles in the automotive industry and they will also become progressively more important in the truck business.”

Kennis, established 50 years ago, is a manufacturer of articulated roller cranes. It has been owned by Hyva since 1991. Crane production was integrated into the Hyva crane factory at Poviglio, in Italy, in 2013. Netherlands-based Hyva was started in 1979. It operates in more than 130 countries and there are around 2,500 employees.