According to wind power industry promotional body WindEurope, last year was a record year for wind installations with a total of 539 GW of wind energy being produced globally. WindEurope CEO Giles Dickson said, “Onshore wind is now the cheapest form of new power generation in most of Europe, and offshore wind is not far behind with costs having fallen over 60 percent in three years.” As a result, companies working in the sector are busy, as illustrated by the following examples.

Belgium-headquartered international heavy lift and transportation specialist Sarens was commissioned by Russian wind farm company Vetrotechnika to install three new Enercon E-70 turbines 20 km south of Kaliningrad, Russia. The Sarens team used a Liebherr LTM 1750-9.1, which can work with two hooks for installing hubs with blades. The crane was transported by 12 trucks from Gdansk, Poland – a journey that took three days. It took around 17 hours to assemble the crane, Sarens said.

Installation of the turbines took place in difficult conditions. The temperature was below -18°C with wind speeds above 10 m/s. “Despite severe weather conditions the Sarens team successfully completed the WTG building project in accordance with the client’s cost and timelines,” says Sarens project manager, Suprunets Dmitry.

ALE said it was contracted to provide both the craneage and installation of 60 wind turbine generators (WTGs), with their components weighing up to 120 tonnes each and with hub heights of 157 m. According to ALE, it decided to use two of its three new Krøll K1650L tower cranes, which it bought earlier this year, due to their low counterweight, increased visibility, quick assembly functionality, and their ability to work in high winds and with uneven or small hardstands. In addition, ALE is using crawler and mobile cranes to help lift and install the WTG components. 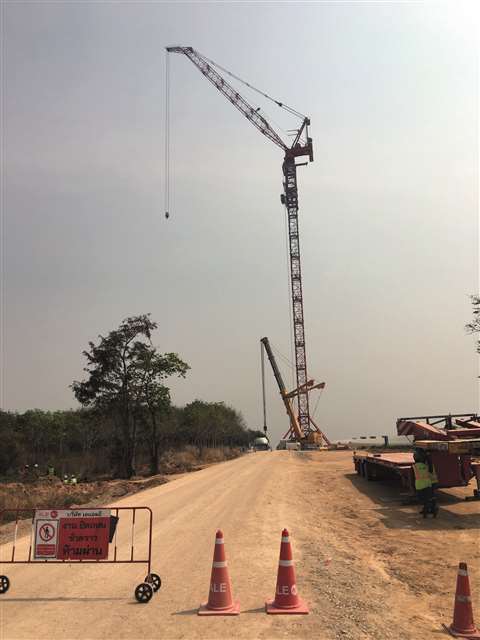 “For this project we are using the most time- and cost-effective method to install WTGs at this hub height,” says ALE project manager Tommy Quik. “By using these compact pedestal cranes, the civil works and costs have been significantly reduced for our client. The crane has lifting capabilities like no other tower crane on the market and we are pleased with the good results in lifting and installation activities on the project so far.”

Sarens has also been busy with wind farm work in Australia. So much so, that at the end of 2017 it purchased two new Liebherr cranes specifically for wind farm work in the country: the LG 1750 SX and LTM 1450-8.1. The 750 tonne lattice boom LG 1750 SX is mounted on an eight-axle truck chassis and is working on the Sapphire wind turbine installation project for wind turbine manufacturer Vestas, while the 450 tonne capacity class LTM 1450-8.1 all terrain is being used on a project for Adelaide-based construction and civil engineering company Catcon.

Heavy lift and transport specialist Mammoet also reports that demand for its services for the Australian wind market is growing. This, it says, is partly as a result of renewable power targets set by the Australian government. According to Mammoet, the size of hub heights, rotor blades, nacelles and tower sections are all growing, which requires larger cranes to carry out installation. As such, Mammoet has added another LG 1750 to its Australian fleet to help meet demand.

Mammoet operations manager Riki McMahon comments, “We are equipped for the future developments and demands of the market with our highly specialised team of professionals, our extensive fleet of main cranes ranging from 300 to 750 tonnes and our experience gained over decades installing wind farms around the world. We are in the best possible position to optimise wind farm construction processes for our Australian customers.”

With regards to offshore work, Mammoet has also been contracted by fabrication, engineering and contracting services provider Lamprell Energy to carry out work for the East Anglia One offshore wind farm project in the North Sea off the east coast of the UK. The contract is for the heavy lifting and transport of 60 jacket foundations at Lamprell’s Jebel Ali, Hamriyah and Sharjah yards in the United Arab Emirates. The jackets will be loaded onto a specialist ship bound for Europe. 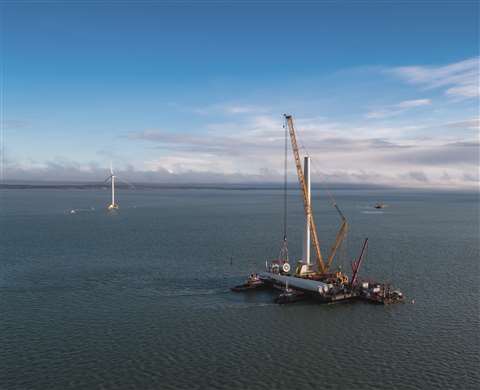 Earlier in 2018 Mammoet completed the installation of four 7 MW wind turbines at the Nissum Bredning near-shore wind farm in Denmark. Mammoet said Nissum Bredning was located in shallow water that could not be accessed by traditional methods. Specialist installation vessels usually used for this type of work operate in water up to 30 metres deep; however, in the Bay of Thyborøn, where Nissum Bredning is located, the water is it just three metres deep in some places, said Mammoet.

The company said following a conventional approach would have involved dredging – which would have taken time and money. Instead, Mammoet used a barge with an integrated ballasting system which allowed it to be lowered and grounded onto the seabed. This, it claimed, provided the necessary stability for the operation wcchile eliminating the need for dredging. Mammoet said the solution effectively resembled an onshore installation and meant the lift could now be performed with an LR 11350 crane – a land-based crane which, among others, is used for onshore wind power projects.

In March 2018, heavy lift and transportation specialist Sarens was commissioned by Dragados Offshore, an engineering, procurement, and construction (EPC) contractor for the oil, gas, and other energy-related industries, to load-out four substation jackets for Hornsea Project One in the North Sea. When finished Hornsea Project One will be the largest wind farm in the world.

The jackets were located on a quay in Cádiz, Spain. Each jacket had an average weight of about 1,900 tonnes and a height of 60 m. Six Sarens crew members carried out the weighing, transport to the quay-side, and the final load out using 72 SPMT axles lines, 16 200 tonne load cells, and 28 600 tonne pumps. To complicate matters, they had to co-ordinate the load out with the rising tide. Sarens reports the project was completed safely and on time.

Dutch engineering company Temporary Works Design (TWD), which specialises in creating custom-designed tools and structures designed to enable its clients to perform transport and installation projects safely and on time, says it has successfully completed the turnkey delivery of a jacket lifting tool to international dredging and offshore contractor Van Oord.

According to TWD the jacket lifting tool has a capacity of more than 1,000 tonnes yet weighs just over 25 tonnes itself. The tool was officially handed over early February, fully load tested and certified, and has already been used to lift two 60 m high jackets at the East Anglia One offshore wind farm, in the North Sea.

According to TWD, the tool can be adapted to work with different flange diameters and can be fully controlled by remote control.

Chinese multinational engineering company Shanghai Zhenhua Heavy Industries (ZPMC), based in Shanghai, says that over the last few years it has been focusing on developing its services for the offshore wind power industry.

ZPMC also reports it has won the engineering, procurement and construction (EPC) contract for the Guangdong Yuedian Zhanjiang Wailuo Offshore Wind Power Project. The company will use its Longyuan Zhenhua installation vessel to install 36 5.5 MW wind turbines and one 220 KV offshore booster station.

ZPMC hopes this will help China’s marine wind power develop further out to sea rather than being restricted to shallower waters. ZPMC adds that it is also working on a bottom-supported offshore wind power installation platform that will have a lifting capacity of 2,500 tonnes.

The collaboration involves integrating a Barge Master BM-T700 platform onto a DPII feeder barge. Barge Master introduced the BM-T700 platform in 2013 and says that it has proven itself in a number of projects. By compensating the vessel’s motions, the platform creates a stable lift-off base for weights up to 700 tonnes in sea states up to Hs 2.5 metres. According to the two companies, this means operations can continue in more adverse weather, aiding project completion within the allocated time frame.

The BM-T700 platform is Lloyds certified under the lifting appliances rules and GustoMSC and Barge Master say the system feeds wind turbine components to the offshore installation site quickly and safely where they can then be installed by a wind turbine installation jack-up. 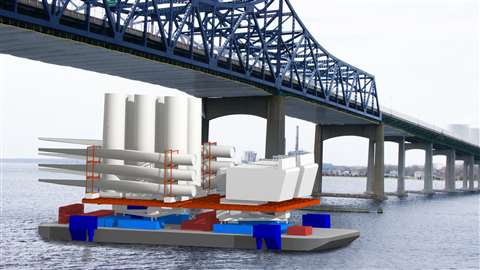 The feeder solution from GustoMSC and Barge Master