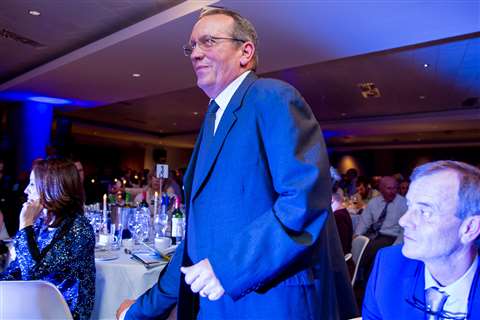 “This was a very tough job, at a height of 99 metres and requiring a workforce of 145 employees, and Jet Demolition executed it superbly”

Jet Demolition was already no stranger to the World Demolition Awards, having won in the Explosive category in London last year.

This year’s entry was in a different field, but the result was the same. Despite some fierce competition, managing director Joe Brinkmann found himself retracing his steps to the stage.

Duvha Boiler 3 was a high-risk job.

As well as the demolition of the coal-fired boiler and ancillary equipment involved removal critically compromised structures following an over-pressurisation event at the 3,600 MW power station in Mpumalanga, including a key requirement of replacing the damaged 600 MW boiler to allow for later replacement.

It was also labour intensive, being carried out in two 12-hour shifts every day with the labour force peaking at 145.

For such a detailed project, Jet used a range of demolition methods including complex rigging with purpose-built winches, extended length-chain blocks and mobile cranes; extensive rope-access activities; and controlled cut-and-drop techniques where the boiler walls served as a drop chute.

The site was cleaned and demobilised in June 2018. The project logged more than 330,000 hours without a lost time injury,