The project involves the replacement of two Liebherr offshore cranes and the modernisation of a third. Work started in 2016 and is scheduled to be completed by the end of 2020. To date, Liebherr has finished the replacement one of the two cranes and modernised the third.

Liebherr said the work is very complex and, so far, it has spent 6,000 hours on planning alone. The work has involved a number of different Liebherr companies, including Liebherr-Russia OOO (which did the contract drafting and signing), Liebherr-MCCtec Rostock (which is responsible for the operational refurbishment of the platform), and Liebherr-Werk Biberach (which provided a tower crane).

The first crane replacement was carried out between spring and autumn, 2018. It involved replacing a Liebherr BOS with a Liebherr RL 1500. The work was conducted by 24 Liebherr employees and involved the installation of a 230 HC-L 8/16 Litronic tower crane as a support crane. A custom sliding system also had to be built to move heavy components and modules over the platform.

The modernisation of a BOS 1900 crane has also been completed. The crane will use the same operating system as the two RL 1500s.

The third phase of the project is scheduled to take until the end of 2019 to complete and will include the installation of the second RL 1500.

According to Liebherr, the RL 1500 uses a cylinder luffing box boom design and a diesel-hydraulic driven main engine. It has been modified to handle loads up to 65 tonnes – 25 tonnes more than the standard lifting capacity of a Liebherr RL 1500. Liebherr said this has been achieved by using three-fall reeving. Equipped with a main and an auxiliary hoist, the RL cranes have a maximum outreach of 42.6 metres. Liebherr said this means they are suitable for general purpose applications.

Because of the extreme conditions the cranes will be operating in, Liebherr has equipped them with an arctic temperature package, enabling operation down to -36°C. Liebherr said that 10 m³ cabins can be specified.

For ease of handling, the box boom has been split into two pieces. After mounting the pivot piece to the column, the second boom section is fixed via bolted connections.

A video of the project can be seen at: www.youtube.com/watch?v=s3a5xTE9dH8 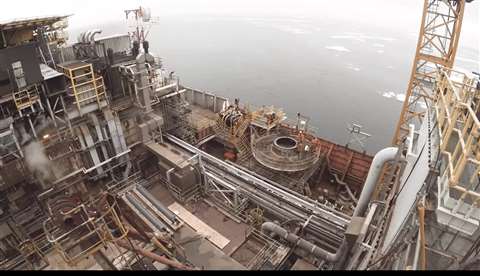