The latest generation wind turbines are bigger than any previously seen and forecasts suggest this trend will continue for as long as possible. As a result, the equipment being used to transport them is evolving and there are a number of new products on the market designed to transport these larger wind turbine elements.

New from Luxembourg-headquartered specialized transport equipment manufacturer Faymonville Group is the Blademax, which was launched at the Bauma 2019 trade show. Blademax is a rotor blade lifter with a capacity of 650 tonnes so that it can transport the latest generation of mega wind turbine blades.

The blade adapter can be mounted on a self propelled vehicle or between modular axle lines. It picks up the rotor blades, raises them to 84 degrees and swivels and rotates them 360 degrees. A third vertical rotary axis can be integrated as an option, enabling a lateral swivel angle of 20 degrees. These attributes, Faymonville says, make it suitable for wind turbine blade transportation in a range of environments, including narrow streets, urban areas, wooded areas, and mountainous terrain. 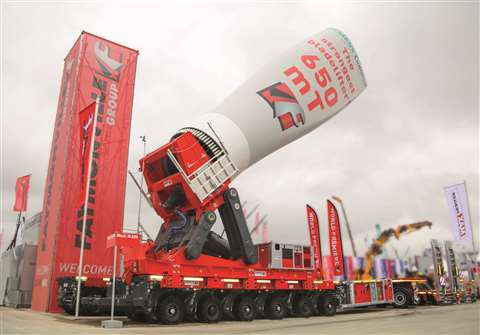 The Blademax was launched at Bauma 2019. After the show this unit went to Sarilar Group in Turkey

The Blademax has a patented tilt kinematics system that Faymonville says means the position of the centre of gravity remains more stable when the blade is moved from the vertical to the horizontal position compared to conventional devices.

A patented stability control system monitors safety-relevant information and alerts the operator if critical limits are approached. In addition, the Blademax works without the use of counterweights.

Catering for the transportation of bigger blades is also the focus of a new third generation wind turbine blade adapter from Tii Group (Scheuerle, Nicolas, Kamag, Tiiger). The system is suitable for blades longer than 80 m and it can tilt them to 70 degrees. The adapter can be mounted on heavy duty platform vehicles or self propelled vehicles and has an improved payload moment of 610 tonne-metres. 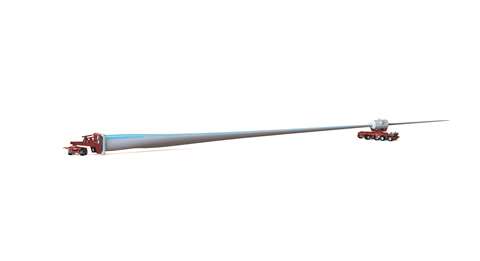 The pick-up and loading procedure of the turbine blade has been simplified, says Tii. The quick-release plate has been designed to be more accessible, enabling the adapter and blade to be rapidly bolted to the frame from the inside, it explains. It is also possible to attach the drawbar element directly to the wind turbine blade adapter.

The Tii Group has also launched what it describes as a ‘weight-optimised’ system for the transportation of turbine blades over 80 m. The system comprises a two-axle jeep dolly with a free-turning device and a four-axle trailing unit. A lifting device is used to pick the blades off the ground using a coupling solution consisting of a root adapter and a root frame. The free-turning device is mounted on the root frame and, at the rear, the rotor blade is supported on the trailing unit. According to Tii, this configuration makes the system highly manoeuvrable and provides a high level of load safety. In addition, blade support joints are articulated for careful handling of the delicate blades. A clamp can also be mounted on the rear of the transport system. The lifting height can be altered between -200 mm and +2,000 mm to aid transport over rough terrain and the system runs on air-suspended BPW axles. 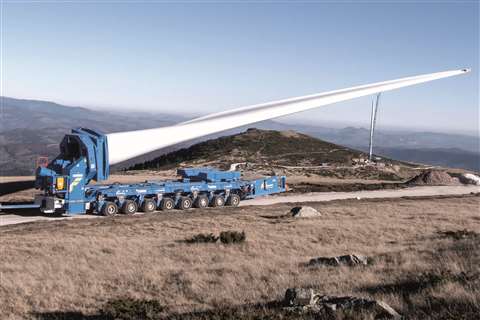 For empty runs the two units can be coupled together to form a semitrailer combination with an overall length of 16.5 m and a total weight of under 60 tonnes. This, Tii says, means that it does not require a special permit for use in Europe.

Germany-headquartered trailer and specialized vehicle manufacturer Goldhofer has also developed a wind blade transporter trailing dolly for its wind transport portfolio. Goldhofer describes its BladeS as ‘a minimalistic system approach in which the cargo itself has a structural function within the configuration’.

At the back of the tractor is a free-turning device on which the lower end of the turbine blade is mounted. The blade’s top end is placed on a trailing dolly and clamped between two holders. The turbine blade itself connects the tractor and the dolly. According to Goldhofer, the advantages of this are a lower overall weight, reduced fuel consumption and a smaller capital outlay compared with other blade hauling solutions.

For blades over 70 m long, Goldhofer has the Ventum blade trailer. The five-fold extendible flatbed semi-trailer has an extension length of 72 m, including the gooseneck. The gooseneck can be hydraulically lifted and lowered and the pendular axles have a stroke of +/-300 mm. A rail-mounted BladeX lifter for the tip of the blade can also be specified. The hydraulic gooseneck can be lowered so rotor blades with large hubs can negotiate tunnels and underpasses. Loading height is 1,250 mm. For extra ground clearance, two support legs facilitate the extension and retraction of telescopic tubes. This means the deck behind the gooseneck can be extended from 13.5 m for empty running to more than 68 m. Its adjustable steering lets the vehicle be driven at its 13.5 m basic length without a second person in the cab.

Wind energy company Enercon has bought six of the Ventum blade trailers. “Transporting long rotor blades and delivering them just in time is an undertaking that Enercon can now handle on an intelligent and flexible basis,” says Enercon managing director Hans-Dieter Kettwig. 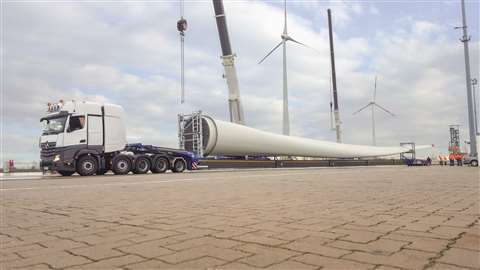 On the job front, specialized transportation companies have also been busy. International heavy lift and transportation specialist ALE has completed the transportation of heavy wind components through what it describes as a challenging 1,000 km route across Thailand. It started the work in April 2018 and completed it in January 2019.

To carry out the work, ALE used a range of specialist equipment including RA4 tower clamps, which enabled it to comply with local weight and height restrictions, and its K1650L tower crane, which can lift 135 tonnes and operate in wind speeds up to 15 m/s for lifts above 60 tonnes.

ALE has also been commissioned to provide the full turnkey scope for the transportation and installation of almost 100 components for 13 wind turbine generators at the Dhofar Wind Project in Oman. 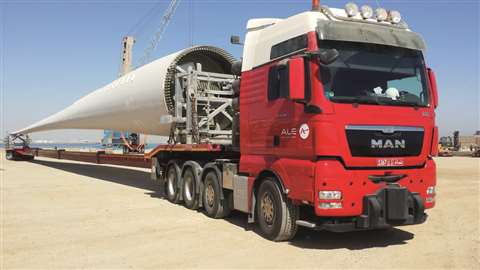 The 50-megawatt (MW) Dhofar Wind Power Project is being jointly developed by Abu Dhabi Fund for Development (ADFD) and Masdar (Abu Dhabi Future Energy Company), with construction awarded to GE and Spain’s TSK. ALE is transporting the components 590 km overland. Due to the size and scale of the convoy, with components measuring up to 65 m long and weighing up to 100 tonnes each, the items require a police escort.

The components had to be transported between the Port of Inverness and Dorenell, a distance of 80 miles (130 km/h). Before the transportation commenced, each section of the journey was analysed and surveyed to ensure the loaded components could navigate safely and unimpeded. This included test drives, specialist swept path analysis reports and topographical surveys. 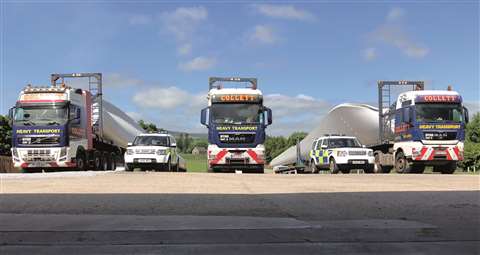 Once all the relevant authorities were in agreement with Collett’s plans, permits approved, and police escorts in position, the transportation of the components began. Collett used three clamp trailers, six blade trailers, two six-axle step frames and pilot cars during the job.

The journeys were made during off peak hours in order to minimise disruption. Two bridges needed to be crossed. For this, the loaded vehicle had to cross on its own and not exceed 30 mph (50 km/h) to protect the stability of the structure. The final components were delivered to the Port of Aberdeen instead of Inverness to avoid road works. The work was conducted over a six-month period and all components were delivered successfully.

Dutch dredging and heavylift company Royal Boskalis Westminster has been awarded a contract for the Inch Cape offshore wind farm project in the North Sea, off the coast of Scotland, UK. 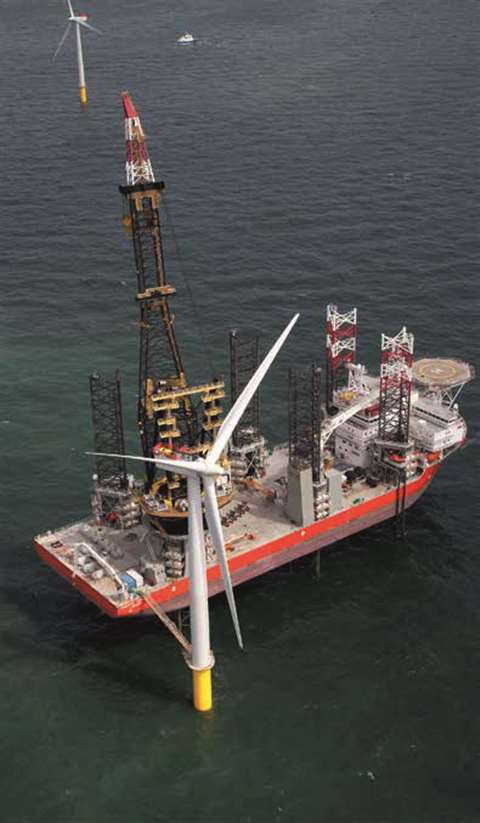 Boskalis will carry out the transportation and installation of up to 72 pre-piled jacket foundations and up to 84 inter-array cables, plus the transportation and installation of an offshore substation for Inch Cape Offshore Limited (ICOL), a subsidiary of Red Rock Power. Work is subject to a successful bid by ICOL in the next UK Contracts for Difference auction, in mid-2019.

Excluding procurement, the contract value is forecast at more than €200 million (US$ 229 million). Boskalis will use its crane vessel Bokalift 1 for the foundations and the offshore substation foundation, sub-structure and topside. It is a self-propelled crane vessel with a 3,000 tonne capacity revolving crane. The available deck space of 165 by 43 m is a unique feature, Boskalis said.

Netherlands-based manufacturer Nooteboom Trailers has been granted a European patent for the lift adaptor for its Mega Windmill Transporter.

The Liftad adjusts to fit a range of different towers and, depending on the diameter of the tower section, has a lifting capacity of 100 tonnes. Nooteboom says it applied for the patent back in 2005 and it will now remain valid until 2023. 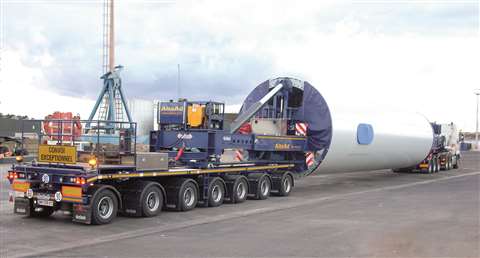