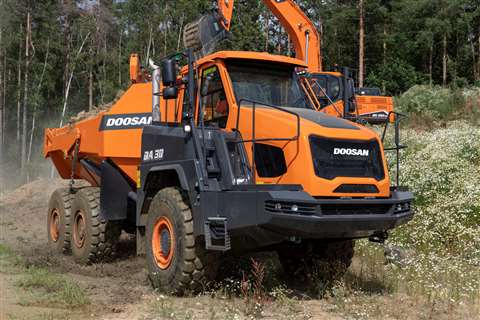 The latest articulated dump trucks (ADTs) from Doosan Construction Equipment are the Scania-powered Stage V compliant DA30-7 and DA45-7. The trucks have payloads of 28 tonnes and 41 tonnes, respectively and Doosan says the engines have undergone two years of intensive testing in “exacting construction and mining environments”, to ensure their reliability.

The advanced features of the DA30-5 truck – including a new cab, self-levelling front suspension and tandem bogie system – have been carried through to the 7 Series version.

The DA45-7, however, features a semi-levelling front suspension that adjusts itself independently, depending on the operating conditions, to ensure a comfortable working environment for the operator.

New features also include a new positioning of the diesel and AdBlue tanks, which have been lowered, allowing the operator to fill them from ground level. The greasing system is also relocated.

The new ADTs are equipped as standard with a real-time payload measuring system, with a light indication for excavator operators to aid productivity and reduce fuel consumption.