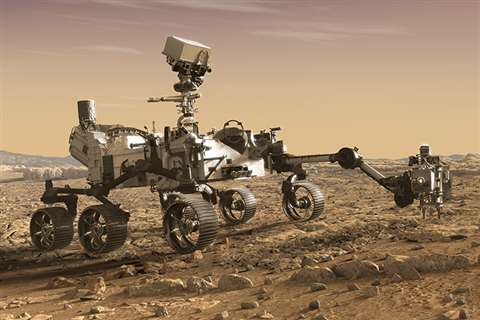 The United States’ space agency NASA has reached what it describes as a milestone point on its Mars 2020 rover mission thanks to the use of a sky crane.

In a pivotal test, NASA technicians used a sky crane that was originally designed and developed for its 2012 mission to Mars, to simulate the landing of its new Mars rover robot.

Part of the mission’s separation stage, the sky crane will lift the rocket-powered descent stage assembly away after the six-wheeled robot touches down on the planet’s surface.

Ryan van Schilifgaarde, support engineer for Mars 2020 assembly at JPL, said, “Firing the pyrotechnic devices that held the rover and descent stage together and then doing the post-test inspection of the two vehicles was an all-day affair.”

“With this test behind us, the rover and descent stage go their separate ways for a while. Next time they are attached will be at the Cape next spring during final assembly.”

Mars 2020 is scheduled to launch from Cape Canaveral in Florida, USA, in August 2020.

The mission will see the rover robot collect samples of the planet’s surface, which will be returned to Earth later as part of a differenct mission. NASA said it hoped to find past evidence of microbial life and possibly signs that habitable environments might exist on the planet.

This latest intergalactic expedition aims to follow the success of NASA’s Mars rover Curiosity, which landed on the planet in August 2012. It was this project that led NASA to develop the sky crane landing method.

Like the Curiosity rover robot, the new Mars rover – which is yet to be officially named – will land on the planet’s surface using the “sky crane” method.