APEX Asia has opened its doors this week in Shanghai.

The second APEX Asia show is double the size of the first event in 2017, with the indoor space complemented for the first time by an outdoor product display area. 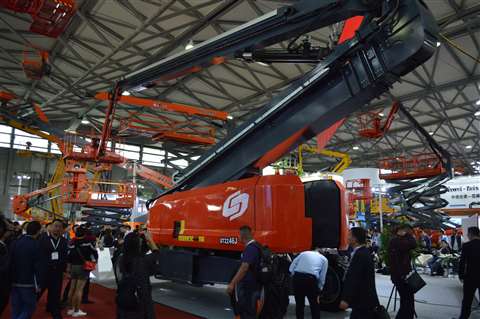 Sinoboom launched its 48.6m working height GTZZ46J articulated boom on the opening morning of the show.

More than 60 access-related brands are displaying their products at the show, taking place alongside CeMAT Asia at the Shanghai New International Expo Center (SNIEC) this week, 23-26 October.

The show coincides with a period of major growth for the access industry in Asia and represents the fast-expanding number of MEWP manufacturers in China, which are aiming to export their products globally. It is organized by KHL Group and B.V. Industrial Promotions International (IPI), in cooperation with Deutsche Messe AG, the organiser of CeMAT Asia. Visitors to APEX Asia and CeMAT Asia can move freely between the two shows.

Among the exhibitors is a raft of generalist construction equipment producers that have set up their own access divisions in recent times.

LiuGong is kicking off its new access equipment division with a 22m working height scissor lift at APEX Asia. LiuGong’s D-series scissors adopts a new hydraulic system and advanced electrical control. A range of batteries, from different manufacturers, can be used in the series, as well as there being a Lithium battery option. By the end of next year, and thanks to its new fully-automated production line that started operation in 2019, LiuGong’s range will cover 6m to 16m working height scissors. 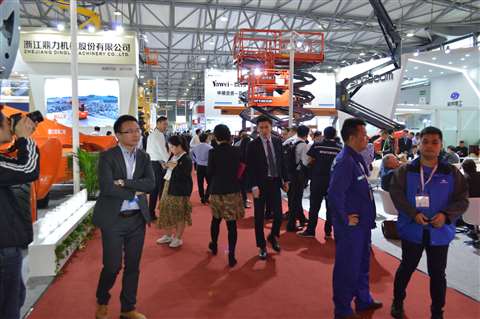 Busy aisles on the first day of APEX Asia in Shanghai.

XCMG has significantly expanded its MEWP output. At Bauma China last year, the company launched a telescopic big boom to compete with JLG’s 1850SJ and Genie’s SX-180, the 56.6m platform height GTBZ58S. This year, at APEX Asia, the company will continue to fill out its telescopic boom range with the 20m GTBZ20S. Like other manufacturers, it is building facilities to accommodate its plans for expanded MEWP production.

Mantall shows its latest mast lift, the IMP120J at the show. The new model steps up to the mark in terms of technology and is designed to have global appeal and offers dual AC electric drive and proportional lifting system. The machine has a superior reach, says Mantall, and a 180-degree rotation in both directions.

EHM has a new completely electric vertical mast version of its E-series on its stand. The company has recently evolved into scissor and boom production, notably the ES scissor series with 6m to 14m platform height models.

Representing one of the newly-launched Chinese access equipment manufacturers at the show is Fronteq, set up by overhead gantry crane specialist Eurocrane. The company has a number of scissor models from 4m to 12m, on its stand.

Another new access manufacturer at the show is Shandong chufeng heavy industry machinery (CFMG). It has been involved with lifting equipment, particularly hydraulic lifting platforms, and has now introduced scissor lifts to its line-up.

They are joined by the established major manufacturers based in Europe and North America. Included is JLG with its recently-launched ES Series lightweight electric scissors and the 520AJ rough terrain scissor being launched in the Asian market. 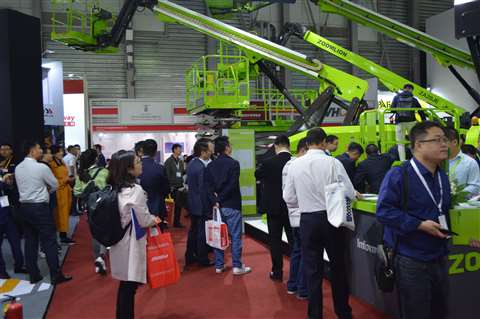 Genie is aiming its latest Xtra Capacity models at Asia. The S-85 XC and SX-135 XC will be on the stand, along with its latest hybrid offering, the Z-60/37FE.

From Haulotte there will be the new HTL3207 telehandler, designed to be compact and comfortable. The new compact Haulotte Star 8S mast lift will be there too.

Skyjack has a variety of MEWPs at the show, including the compact SJIII 3219 DC electric scissor lift and the SJ16 vertical mast. The company will also display its SJ63 AJ articulating boom.

Look out for news from the many other new and established exhibitors at the show during the week on www.khl.com