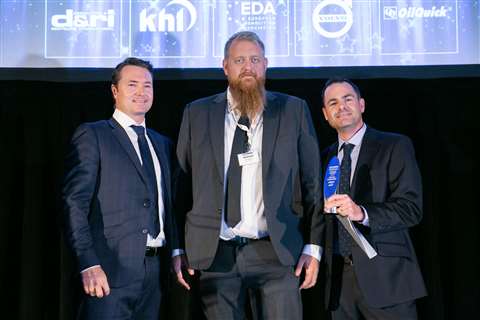 Clinton Dick and Simon Gill of Liberty with Per Skaaret (centre), CEO of gold sponsor OilQuick

As the focus returned to contractor-based categories, Liberty’s demolition of the Munmorah Power Station meant that four continents had now supplied the winners of at least one award.

Australia and New Zealand have always strongly supported the event with both awards entries and delegates and this year Liberty followed companies such as Mainline Demolition and McMahon Industrial Services on to the winners’ platform.

The judges’ reaction was: “This was a big job, with 890 tonnes of asbestos removed, a 98% recycle rate, and good blast precautions.”

Three key explosive demolition events were carried out during the course of the power station’s removal by Liberty Industrial’s in-house explosives team, the first of which removed the twin 155 m high stacks, the second event to demolish boilers 3 and 4, and the final blast event to demolish boilers 1 and 2. The boilers are the largest demolished in Australia to date.