Record goal with XCMG at Gulei 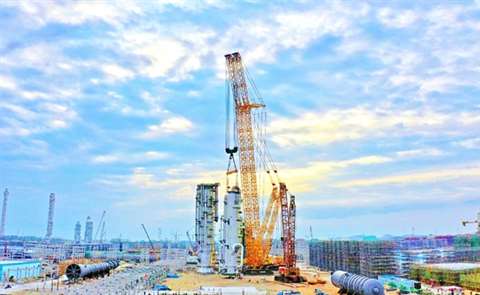 Early May saw completion of the erection of a 2,000 tonne, 102 metre refinery vessel on the Gulei refining and chemical integration project in Zhangzhou, Fujian Province, China.

In the final part of the assembly, the XGC88000 was used to hoist the upper section of the wash tower of what is claimed as the world’s largest EO / EG (ethylene oxide and ethylene glycol) production vessel. The two-section tower has a diameter of 9 metres. At a height of 50 metres the upper section of the tower was positioned accurately enough over the lower half to be able to weld them together at height.

Commenting on the achievement Wang Min, XCMG chairman, said, “XCMG is always in pursuit of reaching the higher and stronger goals, the XGC88000 has worked on a dozen major petrochemical projects overseas and set new records one after another. The landmark achievements will further expand XCMG’s presence in the international market and inspire our company to continue to strive for excellence.”