Electric excavator from Cummins and XCMG

Cummins and XCMG have collaborated in the creation of an electric mini excavator. A prototype has been built to demonstrate the technology that has been developed. 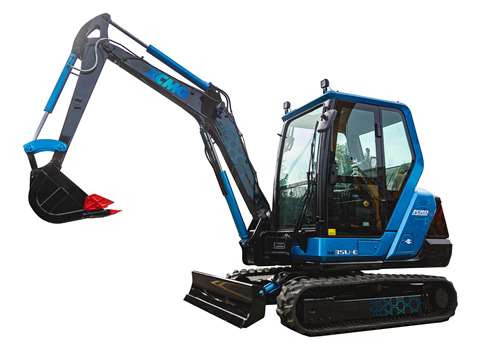 The prototype electric excavator from Cummins and XCMG

The 3.2 tonne machine made its debut at this year’s ConExpo, where it earned the title of the most beautiful machine at the show.

It was said to be suitable for jobsites in densely populated urban areas where emissions and noise levels are limited.

On a single charge of less than 6 hours, the excavator can run for a normal 8-hour shift. The short charge time allows the machine to be charged overnight, eliminating downtime and taking advantage of off-peak energy savings.

Each battery module is designed to be shock and vibration resistant to endure harsh conditions on construction sites, and the motor and hydraulic system have been matched precisely for an efficient, reliable and quiet drive system.

The prototype is currently in China, where a series of performance and customer tests are being conducted on it. Based on the results of these tests, Cummins and XCMG will refine the excavator before it is made commercially available.

This project is part of an agreement between Cummins and XCMG to collaborate on research, development and integration of technologies across a wide range of product lines.