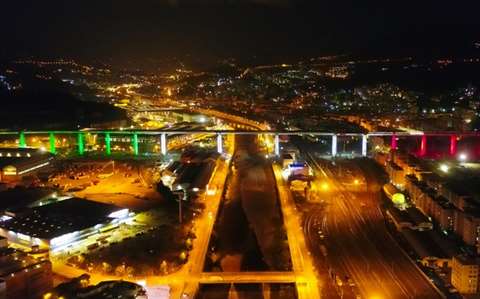 In Genoa, the Genova San Giorgio bridge has been officially opened, less than two years after the devastating collapse of its predecessor, the Morandi bridge.

As the many stakeholders in the project celebrate the engineering feat of constructing the new bridge in just 15 months, they will also see the new structure as a fitting tribute to the 43 people who lost their lives in the tragic disaster in August 2018.

Project management company RINA, responsible for both the demolition of the ruined Morandi bridge and the construction of the San Giorgio, has now released figures highlighting the scope of the project.

The company said more than 220,000 hours of engineering work were undertaken in total, and more than 3,200 technical documents were drafted, with reviews of more than 1,500 project sheets.

It added that an 80-strong team of RINA specialists was dedicated to managing the project, guiding the construction phases, timelines, budgets and progress of the work, which continued across 20 sites operating simultaneously, seven days a week, 24 hours a day for almost two years. In fact, Christmas Day 2019 was, according to RINA, the only day without any project activity.

Ugo Salerno, President and CEO of RINA, said, “It seems incredible to think that just 596 days have passed since the start of activities and today we can at last pause to celebrate a project of reconstruction in the heart of Genoa.”

He added, “It all began with a tragic event that we will never forget. But now is the time to build on the positive energy that has been created and look to the future.

“The “Genoa Model” has already become well known and some say that it is not replicable in other projects, but I don’t think that’s true. Rapid construction is not a question of skipping procedural steps or paying less attention, but rather of planning each and every activity in detail to overcome the inevitable unforeseen events and get immediate and effective responses from all those involved, in particular from the public authorities. More broadly I believe that the restart of our country also depends on this: commitment and dedication combined with a public administration that does not hold back work.”

Roberto Carpaneto, CEO of RINA Consulting, said, “The Project Manager is a concept that you can find all over the world, particularly in complex infrastructure projects. In Italy it is not so common. This lack of precise planning and optimal management of each step, from start to finish often results in projects being late and over budget. When rebuilding the Genoa bridge, natural disasters such as the floods in November 2019 and the Covid-19 pandemic required dynamic adjustments to the planning.

”RINA introduced physical protection, training and tracing, something that was started prior to the Italian government’s decision, but these steps did not lead to delays in completing the work. Managing some of the environmental challenges especially during the demolition which included reducing dust levels and preventing the threat of asbestos contamination were difficult but where achieved. I also want to thank the citizens of Genoa for the warmth and sympathy with which they have always supported our efforts.”

This week, Webuild and Fincantieri – the contractors responsible for the bridge’s construction – delivered the keys to the bridge to Marco Bucci, Genoa’s mayor and the project’s extraordinary commissioner.

Webuild’s chief executive, Pietro Salini, said, “This bridge is the dream of a lifetime. We were able to do something beautiful. We worked day and night with a sense of civic duty. We were proud to collaborate with 330 small companies from all over Italy, every one of them representing the excellence of our ‘Made in Italy’.”

Salini added that any profit made by his company from the project would be given to charity.

Although the bridge is now officially open, the project continues, moving to the surrounding areas, which will now be restored and upgraded.