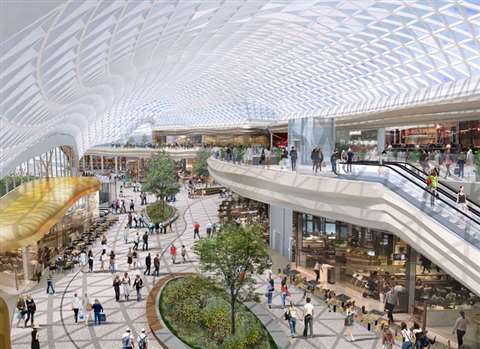 An architects impression of the Leisure Hall in Sheffield, UK

British Land, joint owner of Meadowhall, have begun public consultations on the proposals.

The plans represent the biggest investment in Meadowhall since it opened more than 25 years ago. At £300 million (€390.50), the proposals are also one of the largest investments in the Sheffield City Region for a decade and is said to create over 1,000 jobs.

The project will comprise 330,000m² of space, and will add a range of dining and entertainment experiences not currently available at the centre. These include a number of new restaurants, a cinema to replace the existing cinema in the Oasis Dining Quarter, a new café court, gym and other leisure space that could be used to offer everything from ten-pin bowling to indoor golf.

The Leisure Hall will integrate with the existing centre to create a new multi-levelled, landscaped mall with internal and external spaces for promotional and community uses. It has also been designed to accommodate large outdoor events including live music.

Charles Maudsley, head of retail and leisure for British Land, said, “We are continuing to drive Meadowhall’s evolution to ensure it remains an outstanding place for modern consumer lifestyles.

“This significant step will contribute to Sheffield’s continuation as a driving force behind the Northern Powerhouse. This is a very exciting time and we look forward to working with Sheffield City Council to help ensure Sheffield’s future success.”

A detailed planning application for the Leisure Hall will be submitted in late summer 2016, following extensive consultation with local stakeholders. If the proposals are approved, British Land said it hopes to start on site in 2018 and open the Leisure Hall to visitors in late 2020 to early 2021.