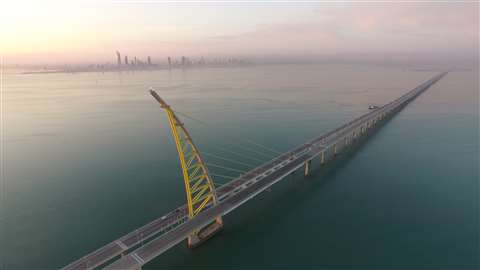 The causeway is now open to traffic

The combination of two sea bridges, the Subiyah Link (36.1km) and the Doha Link (12.4km), make it one of the world’s largest bridges.

The brief from Kuwait’s Public Authority for Roads & Transportation was to ensure a 100-year service life in one of the most aggressive coastal marine environments in the world.

The causeway facilitates development of the uninhabited border region of Subiyah, which will be the site of a major free-trade zone, Madinat al-Hareer or Silk City.

The causeway carries dual carriageways, each with a total width of 17m and carrying three lanes of traffic, an emergency lane and a hard shoulder.

The main section reduces the journey time from Kuwait City to Subiyah from 70 minutes to 20 minutes.

A cable-stayed bridge in the main section creates a navigation channel 120m wide and 23m high to enable access to Kuwait’s Doha port. This opening in the causeway is supported by a 151m high pylon, inspired in its shape by a traditional sailboat, but unconventional in its engineering. The use of structural trusses is said to avoid the need for conventional back stays.