Heavy lift and transport specialist ALE is using its Mega Jack 300 to jack-up pipe rack modules a height of 5.9 metres in Kuwait. 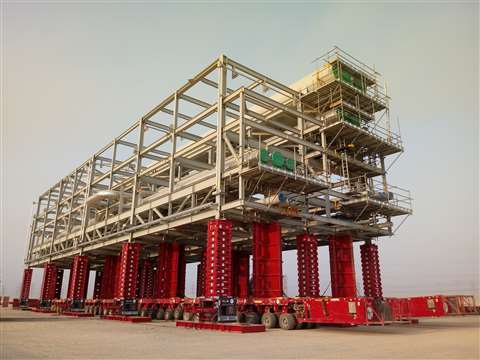 ALE is receiving pre-assembled pipe rack modules, of varying weights and sizes, from barges at the project’s construction dock. From here they are transported on self propelled trailer (SPT) a distance of over 4 km to a staging area. Using the Mega Jack 300, the modules are then raised various heights to suit the on-site finish foundations.

On completion, ALE will have delivered and lifted 188 modules. They measure as large as 40 metres in length and weigh up to 2,100 tonnes.

According to ALE, the components of the Mega Jack 300 system are compact and easy to handle on site, meaning that re-configurations are made quickly. ALE added that by using the Mega Jack 300, jacking time has been reduced, with operations now taking just one or two hours.

The Mega Jack 300 is the latest addition to ALE’s Innovation Series and the third in its jacking range, supplementing the Mega Jack and Mega Jack 800 systems. It has a capacity of 300 tonnes per tower and, according to ALE, is much lighter and more compact than the previous models.

Suzette Ortega, project engineer, commented, “Due to the project’s various constraints and logistical challenges, jacking in the shortest possible timeframe was essential, and the Mega Jack 300 is the best solution for the given task.”