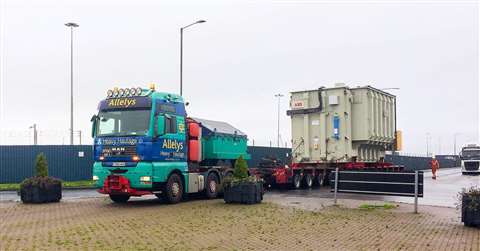 A series of large and heavy components were delivered by Allelys Group in the UK for the Hornsesa Wind Farm project.

Largest of the six units was almost 6.4 metres high when loaded. Along the route it had to avoid a low bridge and be carefully navigated beneath overhead cables. Deliveries of more units will follow, according to The Heavy Lift Group (THLG).

Allelys is the THLG member for the UK. THLG is an international group of specialized heavy transport companies which have joined forces to offer their best expertise and service, in a range of activities. Members services offered include, project forwarding, crane operations, machinery installation and rigging, and oversized road transport.

The single European market precipitated formation of The Heavy Lift Group in 1987, by a band of European heavy lift operators. It has since expanded into a worldwide group with members in Africa, the Americas, Asia, CIS countries, and the Middle East, in addition to Europe.