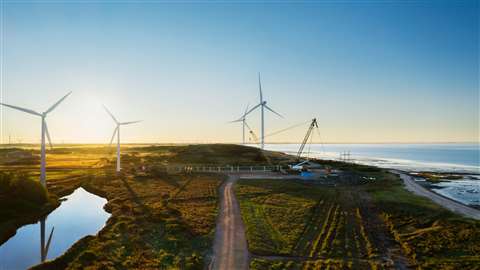 Apple is investing in the construction of two 200m-tall onshore wind turbines in Esbjerg, Denmark, as part of its strategy to become a carbon-neutral company by 2030.

The turbines, which will be among the largest in the world, will produce 62GWh of energy per year, which will be used to power Apple’s data centre in Viborg, with energy surplus being placed on the Danish grid.

According to the company, the turbines will also act as a test project for further planned offshore wind turbines.

The Viborg centre is already powered by 100% renewable energy, following the completion of one of Denmark’s largest solar parks in northern Jutland.

The latest developments in Denmark are in line with Apple’s goal of achieving carbon neutrality across its entire business, manufacturing supply chain and product lifecycle within the next ten years. The strategy includes the transitioning of all of the company’s European-based suppliers to renewable power.

“Investments in clean energy deliver breakthrough innovations that bring clean energy and good jobs to businesses and local communities. This is an area where we have to lead — for the sake of our planet and future generations.”