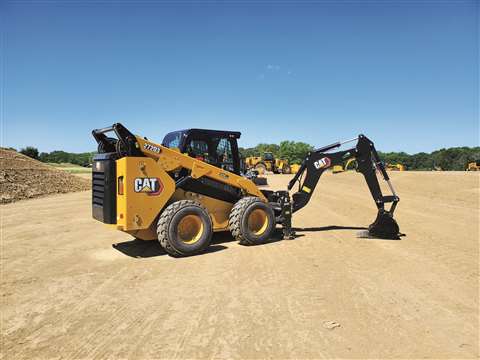 Similar to the multi-tool that some people keep in their pocket or equipment belt, equipment attachments for construction machinery are only as good as their real-world, everyday usefulness and, perhaps more importantly, the ease with which they can be employed.

Original equipment manufacturers (OEMs) are making great strides in simplifying attachment use. Many ‘smart’ attachments on the market today can sense the machine they’re being linked to and adjust accordingly. Among other benefits, this allows one work tool to be used across a fleet of different tool carriers.

Coupler systems have improved greatly as well. Standardisation efforts began decades ago but new efforts are being made all the time to further simplify the use of attachments across carriers.

The ability of today’s attachments to intelligently know the type of carrier they’re linking up with is a game changer. This is because it relieves the operator of a great deal of time-consuming guesswork and potential error.

The D3 Series host machine recognises the attachment and unlocks special display screens that allow the operator to select how the blade is controlled. Selecting the attachment-control mode changes the standard joystick functions and allows the left joystick to control travel, while the right joystick operates blade functions. 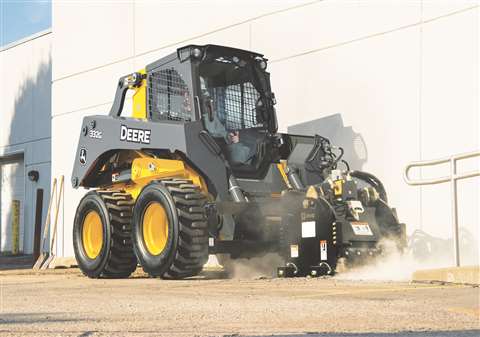 Open-S is a new standard for fully automatic quick couplers for excavators. Launched on 1 October 2020, it aims to allow machine operators to combine machine couplers, tiltrotators and tools from different manufacturers who are in compliance with the standard and be confident that they will be compatible with each other. Products that comply with the standard are marked ‘Open-S.’ 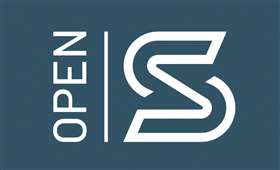 Open-S is owned and managed by an independent organisation, Open-S Alliance, which is led by a council of engineers from the member companies

Together with Anders Jonsson, CEO for Rototilt Group AB, these rival companies are the initiators of Open-S.

“We believe in healthy competition, where the industry’s players compete to have the best products,” says Jonsson. “We don’t want to lock customers into a closed interface. When customers buy a tiltrotator from Rototilt, they should feel confident that any hydraulic tool that complies with the Open-S standard will fit the tiltrotator.”

The standard is based on the idea of giving freedom to end-customers to choose their preferred equipment, with reliable safety solutions, and to enable them to benefit from continued technological development.

“Because we have agreed on how to connect the products, customers can freely choose from the product portfolio from the manufacturers that comply with the standard,” explains Jonsson from Rototilt. “It clearer what fits together and which warranty provisions apply.”

Open-S is owned and managed by an independent organisation, Open-S Alliance, which is led by a council of engineers from the member companies, currently tiltrotator manufacturers Steelwrist and Rototilt.

“Interchangeability is the point,” says Stockhaus. “Any reputable manufacturer who believes in the usefulness of a common standard is welcome. We are already in talks with more manufacturers who want to join in the Open-S standard.”

Stay in your seat

Having to repeatedly climb in and out of a machine’s cab throughout the regular work day is a significant cause of fatigue, which can lead to productivity losses and hazards. With this in mind, OEMs aim to mitigate this issue.

“Leaving the cab to switch out hydraulic attachments can eat up the most productive times of operators’ days,” notes Britta Kopp, marketing manager, attachments, Bobcat. The company make more than 80 tools for equipment such as compact loaders, compact and large excavators, compact tractors, utility products and telehandlers.

When utilising the Bob-Dock system to connect an attachment, an operator must line up their loader with the attachment’s Bob-Dock adapter plate.

The operator then presses the Power Bob-Tach switch inside the cab. The Bob-Tach system then secures the attachment, while the Bob-Dock system automatically connects the hydraulics. The attachment is then ready to use.

“The E-Series cold planers are new solutions for our customers seeking more efficiency on the job by enabling all cold planer functions to be controlled from within the machine’s cab,” says Jessica Hill, program manager, global attachments at John Deere.

“The attachments deliver value to our customers through increased productivity and uptime, while maintaining low daily operating costs.”

The cold planers are equipped with a heavy-duty planetary drive system that delivers high torque speed for the most demanding jobs. The planetary drive system is a wheel drive, which allows the operator to remove the side plate when the attachment works next to a curb, making it suitable for use in tight spaces.

Through complete in-cab controls, operators can maneuver the cold planer depth, tilt and side shift to increase overall productivity. Rear spoil clearance that reaches up to 9 inches (229mm) helps minimise material that is pushed back into the cut.

Like all aspects of the construction industry, the segment of attachments is constantly evolving. This includes the attachments themselves and how they are used, the technology embedded into them and even the standardisation between different companies that is beginning to emerge.

The right tool for the job

With a count of 17 tools, Birla Cements in Chittorgarh, India is home to the world´s largest fleet of Epiroc HB 10000 heavy breakers. Used 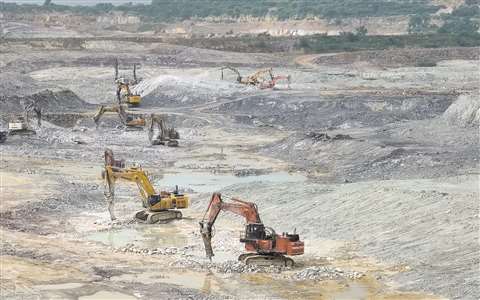 A fleet of 17 Epiroc HB 10000 breakers are working 24/7 at a UNESCO World Heritage site in Chittogarh, India

in its limestone mining operations in Western India, the breakers are said to be up and running 24 hours a day, seven days a week.

Headquartered in Kolkata, Birla Cements is part of the M.P. Birla Group, with cement production in seven locations in India. The company’s limestone mining operation is located near the city of Chittogarh, which is home to the historic Chittor Fort.

Since the Chittor Fort is a UNESCO World Heritage site, no conventional mining activities are allowed within a radius of 10km. Therefore, Birla Cements opted for blast-free mining using rig-mounted heavy hydraulic breakers for primary rock excavation. For this purpose, they invested in a total of 17 Epiroc HB 10000 heavy breakers and have five HB 10000s on order.

In 2015, Birla Cements was looking for a reliable breaker which could work for 3,500 hours without major breakdowns. Epiroc introduced the company to the HB 10000, which has power generated in a single impact between piston and working tool that corresponds to a weight force of around 760 metric tons and impact frequency of up to 380 blows per minute.

The terrain on the mining site near Chittogarh is compact strata, with compressive strength of 100-160 megapascal (MPa). The rig-mounted hydraulic breakers work three shifts continuously with production at more than 15,000 tons per day.

Within the scope of Birla Cements’ maintenance and spare parts contract, Epiroc is on hand to ensure trouble-free operation with minimum machine downtime. The contract includes repair and maintenance support, with people available 24/7 to ensure availability and maintain productivity.

QSC locking system supplied on all tiltrotators with Engcon system 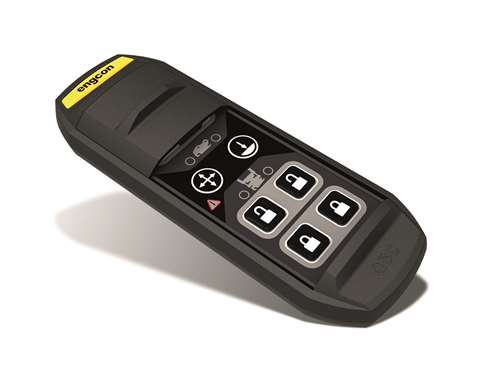 Engcon is now offering its locking system, the Quick Hitch Standard Control (QSC), as standard on all tiltrotators with Engcon’s control system.

The current system for controlling the bucket lock under the tiltrotator will be replaced with Engcon’s standardised locking panel, directing the driver’s actions by means of an alert system to ensure correct positioning. In this way, Engcon aims to simplify the handling of the bucket lock – the hitch control function is standardised, regardless of the make and model of the excavator. This minimises the risk of dropped or swinging tools.

“We usually compare it to what if the gas and brake pedals in a car had different placements depending on what brand it is,” explains Martin Engström, product manager at Engcon. “In this case, if an operator changes from one excavator to another and can operate it the same way, the risk of making mistakes with serious consequences is greatly minimised.”

In addition to the standardisation of the locking procedure, it is also impossible to activate the bucket lock under the tiltrotator while the bucket is hanging in midair – a safety function that is unique to Engcon’s locking solution.

in the air, which can prevent both injuries and deaths,” says Engström.

The QSC locking system, together with Engcon’s quick hitch Q-Safe, also has an audio visual warning system with sound and light alarms if the bucket is connected incorrectly. A safety function that locks the excavator’s turning movements, further increasing safety, can also be ordered as an accessory.

A range of dig depths, reach and hook-up systems are available 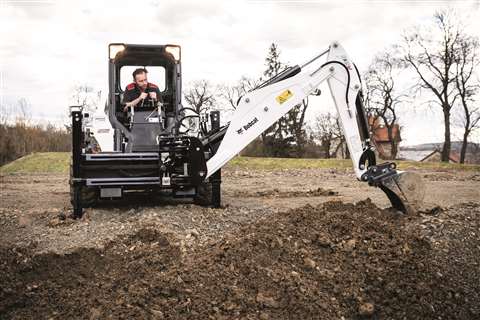 New generation backhoe attachment is compatible with over 30 tools

loader into an excavator.

The new backhoe attachment is available in four configurations – the two Versatile (V) B32V and B35V models and the two Standard (S) B32S and B35S models – that offer a choice of digging depths, reach and hook-up systems.

The largest model in the range offers a maximum dig depth of 3.3m and a maximum reach of 4m. Unlike the Standard models, the Versatile versions can be equipped with additional hydraulic attachments such as augers and breakers.

“We are seeing increased demand for the backhoe attachment and have added even more versatility with the Versatile V versions,” says Daniele Paciotti, product line manager, attachments, Bobcat in Europe, the Middle East and Africa.

“They have a double-acting auxiliary line that allows more attachments to be used with the backhoe attachment, including Bobcat hydraulic attachments such as augers, breakers and tilt buckets.”