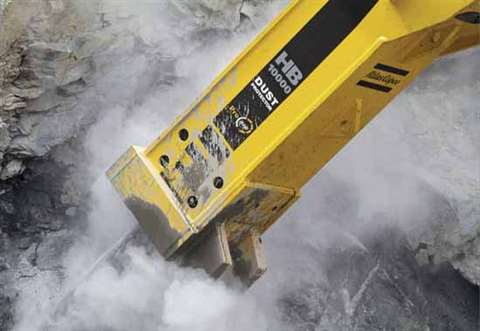 The HB 10000, at 10 tonnes, is now the largest hydraulic breaker in the world a single impact generates a weight force of 760 tonnse

Think excavator attachments and you probably also will think hydraulic breaker. Breakers are among the most common attachments used by the construction and mining industry. While manufacturers are coy when it comes to revealing how many of these flexible and efficient tools are purchased, a good estimate is that some 40,000 to 45,000 are sold annually.

The larger breakers, especially Atlas Copco's new giant HB 10000 (see above), are more commonly found in primary breaking applications in mines and quarries, but occasionally make their way into the construction field. Of particular note in recent months has been the drive exhibited by some manufacturers to provide increased power. Invariably, where breakers are concerned, more power means more size and as a result, some seriously big breakers have found their way to market in recent months.

With much construction work around the world being conducted in built up areas, the demand for quieter working methods has fed the growth in use of'silenced’ breaker models. Most companies active in the field offer standard and silenced versions of their breaker models, although as demand for non–silenced products lessens, it is likely that silenced versions will be all that are available. This is illustrated by Cat's new breaker launches discussed below. In the case of the H45Ds, it replaces two previous models, the H45 non–silenced and H45s silenced products in Cat's compact beaker range.

Atlas Copco is one exception. According to Peter Bigwood, president of Atlas Copco's US operation: “All our breakers are silenced –we have no need to manufacture 'silenced’ versions, something in which we take a great deal of pride –and they are among the quietest breakers on the market.”

The breaker star of the recent Bauma show in Munich was undoubtedly the launch of the Atlas Copco's newest big hammer–and it is seriously big. Weighing in at 10 tonnes, the HB10000 is more than 1,000 kg (2,200 lb) heavier than the largest breaker currently available anywhere worldwide and provides up to 50% greater productivity than the HB 7000, Atlas Copco's 7 tonne model and the largest breaker it produced until the introduction of the HB 10000. Designed for use with carriers weighigh from 85 tons, the new hammer is designed fo primary breaking and a an alternative to drilling and blasting in quarry applications. Whethe such a large unit will find use in the construction role remains to be seen, but as structural concrete quality improves as newer buildings are demolished, there could well be a place for it.

This giant breaker requires an oil flow of 450–530 litres/min, operattes at 160–180 bar and has an impact frequency of 250–380 beats per minute. According to Torsten Treger, product line manager hydraulic attachments; “As early as the prototype phase, it was clear the HB 10000 was going to be a hit. We received several concrete enquiries from operations where our prototypes had been tested even before the production model went on sale.”

The HB10000 features 50% greater productivity than the HB7000 and boasts the StartSelect, AutoControl, PowerAdapt, DustProtector II and ContiLube II features found on the company's line of hydraulic breakers. Atlas Copco will continue to produce the smaller HP 7000.

Turkish manufacturer Inan Makina is another who has gone to the large end of the scale in recent times, with the introduction of its MTB 500 and MTB 700 breakers. The latter weighs in a 7 tonnes and offers an impact energy of 13,000 Joules at an operating pressure of 150 Bar, while the former weighs slightly less, at 5tonnes

Wimmer, the Austrian manufacturer of demolition attachments, including grapples & grabs, buckets, shears and hydraulic hammers, has also added two big new products to its breaker range, the WH 65, which weighs in at 4,750 kg (10.450 lb), and WH 80, which weighs 6,900 kg (15,180 lb), designed for larger excavators up to 100 tons, which will enter series production during 2007. Both breakers require an operating pressure of 190–210 Bar.

Atlas Copco has also been working to develop a range of breaker tools for both its smaller body and heavy–duty hydraulic breakers. The Xprofile range of tools for the former feature an X–shaped section that offers improved penetration and wear–reducing cooling at the tip. The self–sharpening tool tips retain their geometry over a long period. The X–shaped section also prevents dust from building up, making the tools particularly suitable for dust–intencive applications in concrete and rock.

For its heavy duty breakers comes the SilverLine series that is specially matched to the company's heavy–duty hydraulic breakers and are designed for high–load applications. A modified, tougher material combination offers higher resistance to bending forces. Lower wear, cularly when working in abrasive materials, greatly extends tool lifetime. The distinctive silver coating, from where the range's name cores, makes these new working tools easy to recognise.

The Munich showground was the venue for the introduction of Cat's latest addition to its D series of hydraulic hammers. The H180Ds, which will replace the current

H180 S, is expected by Cat to be available by the end of the third quarter of this year.

A heavy–duty suspension system, fitted as standard to significantly reduce shock loads applied to the machine during operation to improve comfort and extend the life of critical machine components. Larger heavy–duty tie rods are used to allow for the increase in hammer performance. Full–length wear plates on all four sides of the inner housing increase the guidance and stability of the power cell and feature visual wear indicators as well as an increased in–service life. Other features include an Auto Shut Off (ASO) and sealed accumulators.

Sandvik Rammer has recently introduced two new models of hydraulic hammers designed specifically for backhoe loaders, the S 23 and S 25. Both will be available as standard and silenced versions, the latter known as City hammers, that are delivered ready to mount on any make of backhoe loader. The S 23 and S 23 City are designed for use with 3–6.5 tonne machines, with the S 25 and S 25 City suitable for use with 5–8.5 tonne machines.

In addition to these new products, Sandvik Rammer has also made some enhancements to its Ramona hammer monitoring system, which is designed to minimise unscheduled downtime, prolong hammer life and maximise productivity.

The enhancements include faster data transfer and communication, now 40% more rapid, along with an improved remote monitoring capability to more accurately monitor hammer performance. Reporting has also been improved to make it more user–friendly, while the addition of a new pdf generator allows more rapid report production for improved response to potential faults and failures.

Meanwhile, Spanish manufacturer Tabe is taking on the numerous Korean and Chinese manufacturers with its 14 model Beta Breaker brand. Produced at the company's new Chinese manufacturing facility, these hydraulic hammers weigh from 260 kg (572 lb) to 3,510 kg (7,722 lb) and can be used on carriers weighing from 2.5 tons to 55 tons. The new breakers use Tabe's internal breaker designs but sport a new square casing.

As compact equipment grows in popularity, and the laws in Europe limit the maximum weight of hand–held breakers to 27.2 kg (60 lb), increasingly it is the machine/breaker combination that is preferred to hand–held breakers. This trend is also prevalent in the USA, albeit to a lesser degree, since 41 kg (90lb) hand helds can still be legally used there.

This has led to a considerable growth in the number of small compact, silenced breakers that can go on a wide variety of today's compact machines from under 1 tonne and

Breakers are now will go on skid steers, micro and mini–excavators. It is notable that this is the area in which the full liners seem to be most active, as they strive to develop an extensive range of attachments that they can offer with their smaller machines in a package approach.

Of the breaker specialists, Atlas Copco has added to its compact breaker line–up with two new solid body products–the SB 52 for micro carriers in the 0.7 ton to 1.3 ton range, and the SB 552, which comes in at the top end of this breaker line, weighing in at 55 kg (1,210 lb).

Bobcat meanwhile, has gone to the other end of the scale with its latest small breaker, the HB280 that is the smallest model in the company's 80 Series of breakers. It has been designed specifically for use on the company's 820 kg (1,804 lb) 316 micro–excavator, which provides a hydraulic flow rate of 20 litres/min, more than sufficient for the breaker's need for 15 litres/min.

This new breaker has a cylindrical design, mproving access to jobs in confined spaces nd is equipped as standard with a special hield to protect hoses and fittings from accidentaldamage during working operations.

The internal design of the new breaker volves fewer moving parts and no tie rods, alowingit to be completely disassembled in five minutes. It also features an automatic pressure egulatory to ensure that the HB280 operates at its optimal pressure to deliver a constant nergy per blow.

These hammers feature another design trend to be seen in the sector, with 50 % fewer parts than the H45/H45s that is being replaced by the H45Ds. As manufacturers aim to reuce downtime and simplify maintenance, the latest breakers frequently are designed with the need for fewer components very firmly in mind. But it is not just for ease of maintenance that this is a desirable feature–it also helps in minimising sound geerated by the breaker.