Bridges are often an integral part of a country’s infrastructure needs, helping to providing transport links over rivers (and even seas), railway, road, and even between high-rise buildings. However, with the high-profile failings of a number of bridges in recent years, such as the Ponte Morandi bridge in Genoa, Italy, the spotlight has been turned onto the safety and reliability of some of these structures.

The US is badly in need of infrastructure investment and a report from the American Road & Transportation Builders Association (ARTBA) in the second quarter of 2020 analysing the US Department of Transportation’s 2019 National Bridge Inventory (NBI) database revealed that nearly 231,000 US bridges need major repair work or should be replaced.

That figure represents 37% of all US bridges and if placed end-to-end, the length of these bridges would stretch over 6,300 miles – over a 10,000km and American drivers cross these bridges 1.5 billion times per day. More than 46,000 of those bridges are reported to be ‘structurally deficient’ and in poor condition and 81,000 bridges should be replaced, according to the report.

ARTBA estimates the cost to make the identified repairs for all 231,000 bridges at nearly US$164 billion, based on average cost data published by the Federal Highway Administration (FHWA.)

The Ponte Morandi bridge in Genoa, Italy is a famous and tragic example of a bridge not being, in some way, structurally correct although bridges do fail around the world but those that do so in ‘developed’ countries receive more media coverage.

The new bridge in Genoa was completed by Italian-based contractor WeBuild completed the project during the height of the Covid-19 crisis in the country. Another bridge project that WeBuild has been working on through the pandemic – through US subsidiary Lane Construction – is the Gerald Desmond replacement bridge, which has recently been opened to traffic.

The US$1. 47 billion bridge is the first cable-stayed bridge in California at a length of 2,700m and the second tallest of its kind in the US with its two towers rising 160m in height.

The bridge, for which construction was done without interrupting vehicle and shipping traffic at the port, replaces the old Gerald Desmond bridge with greater earthquake resiliency and extra lanes to handle truck traffic carrying 15% of the cargo imported into the country by sea. At 62m, it has the highest vertical clearance for cargo ships of any cable-stayed bridge in the country.

Although the Gerald Desmond Bridge was an icon of Long Beach since it was built in 1960, it was no longer able to sustain the heavy traffic. The new bridge will have three lanes in either direction, emergency lanes and bicycle and pedestrian paths.

“If there was a monument to progress, it would be a bridge,” said Webuild chief executive Pietro Salini. “We thank the 3,000 people along with the suppliers and other contractors who worked with such commitment despite the difficult months of the Covid-19 pandemic in order to complete the project.”

Cable-stayed bridges are a popular choice as they similar advantages to suspension bridges but at a lower cost as they require less steel cable, are faster to build and incorporate more precast concrete sections. From a cable-stayed bridge in the US to one in Germany, with the news that German contractor Hochtief has won a €500 million (US$590 million) contract to build Germany’s longest free-spanning cable-stayed bridge.

Hochtief will act as technical leader of a joint venture to build the 802m-long replacement Bridge, set to span the river Rhine in Duisburg-Neuenkamp. The project will be delivered under the auspices of the state-owned planning and construction company Deutsche Einheit Fernstraßenplanungs- und -bau.

The bridge’s construction will be challenging, with the structure’s two pylons to be set 380m apart. The contract also calls for Hochtief to construct sections of connecting A40 highway at either end of the bridge.

Hochtief’s CEO, Marcelion Fernández Verdes, said, “With this project, we make an important contribution to renewing the transportation infrastructure on a main traffic artery in Germany.”

The company expects to break ground on the project early next month, with completion planned for 2026. 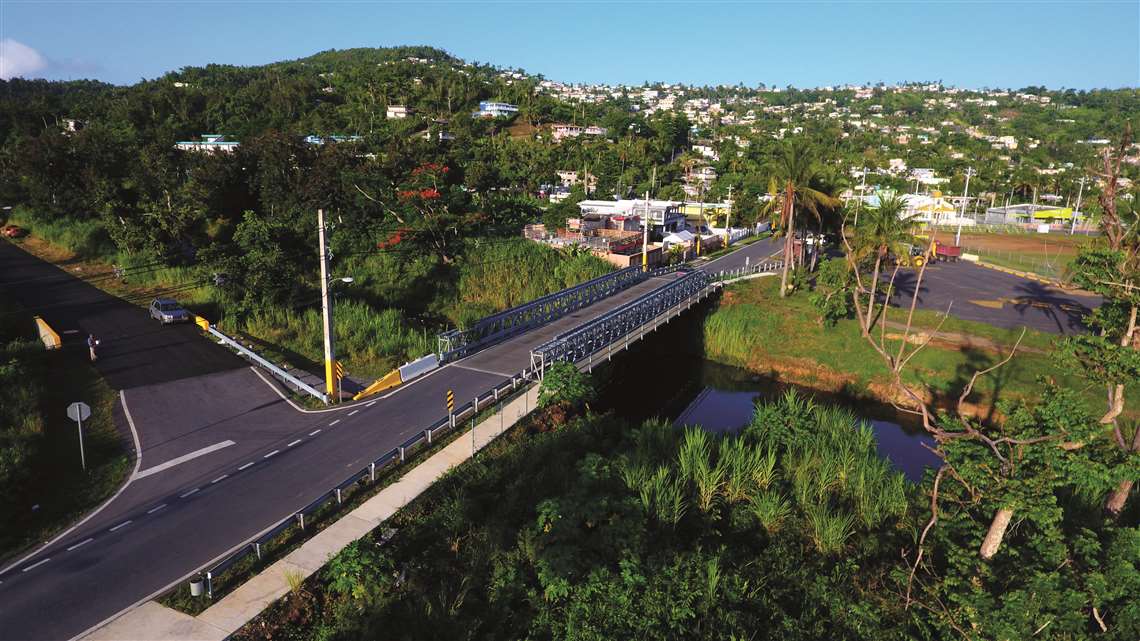 Acrow’s modular bridge solutions are used around the world, such as this one in Puerto Rico

In the construction industry, modular building is one of the biggest trends to have emerged recently and modular construction certainly offers a host of advantages. Acrow has a full line of modular steel bridging solutions for vehicle, rail, military and pedestrian use and has been involved in the implementation of bridge infrastructure projects in over 150 countries.

Talking about the benefits of modular bridges, Paul Sullivan, Acrow’s President - International Business, says, “Prefabricated modular bridges offer great versatility in a wide range of applications. They can be easily lengthened, widened and strengthened to address multiple vehicular needs and load requirements and can be designed for permanent and temporary applications, in infrastructure and construction.”

Modular bridges are often used in remote locations where site access is limited and projects that have challenging environmental conditions, such as extreme weather or difficult ground conditions. Sullivan adds that they have seen an increase in the robustness being demanded of their bridges.

“More recently, we have also seen an increase in the need for stronger yet longer structures, as customers look to procure bridges which are not only climate and seismic-resilient, but also feature longer spans to minimise sub-structure requirements and thereby reduce environmental impact. The availability of high-quality, sustainable, climate-resilient solutions, which are durable and robust, to serve all these requirements is paramount.”

Each bridge comes with its own set of challenges and there was certainly some hurdles to overcome when heavy lift specialists Mammoet were recently tasked with installing a 4,000 tonne bridge as part of the renewal of a railroad overpass in Germany. 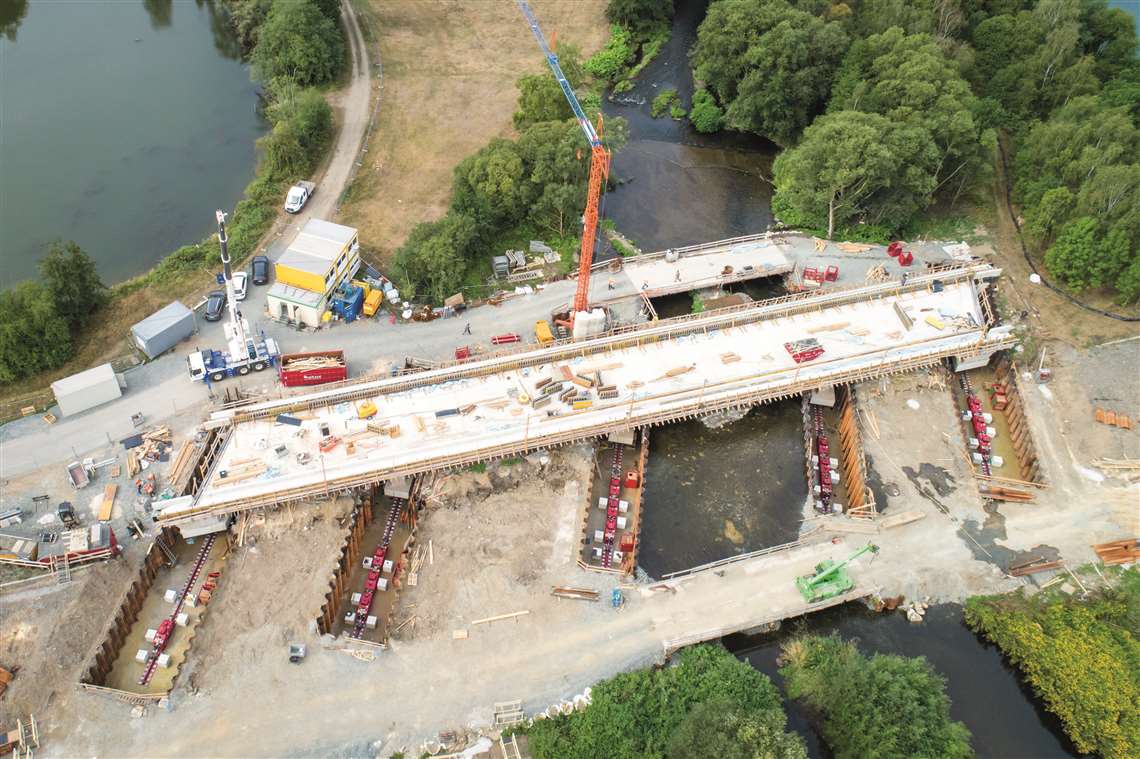 Mammoet installed a 4,000 tonne bridge as part of the renewal of a railroad overpass in Germany

To keep the track closure as short as possible, the new bridge was prefabricated just 16m from the installation site. The plan was to push the bridge into position as a complete structure after demolition of the existing bridge. To the side of the Oker riverbed, five parallel excavation pits were excavated in which the Novarka Skid System with a total of 15 skid shoes with an average capacity of 700 tons each was installed.

Working in the narrow excavation pits was a special challenge and the construction site was in the middle of a nature reserve, so protective measures had to be taken. Due to this the project’s storage area was located 400m away from the construction site and transport of the equipment parts – weighing around 320 tonnes – had to be carried out.

The new bridge structure was lifted using 30 climbing jacks and set down on the skidding system. Afterwards, the bridge was skidded under constant supervision, over a total distance of more than 16m.

Around the world road traffic from cars has increased heavily over the last few decades – it has been estimated that in the US it has increased by 38% in the last 25 years – and it is not just roads that are bearing the brunt of this, but bridges. 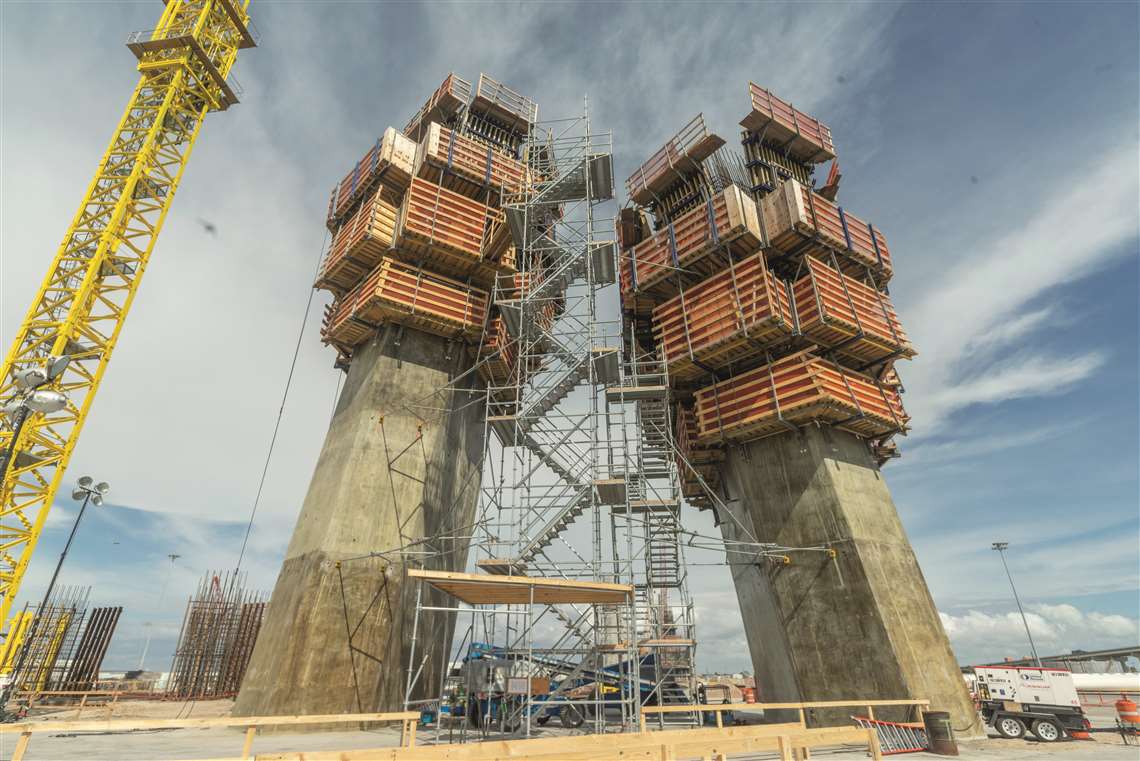 It was due to this reason that the city of Corpus Christi in Texas commissioned the new US 181 Harbor Bridge, which will have a considerably higher capacity than the structure it is replacing. Doka’s formwork expertise was called in to help build the 164m high pylons and over 100 piers.

With six traffic lanes, plus pedestrian and cycle lanes, the new bridge will be better equipped for future traffic levels. It also has greater clearance for ships than the existing bridge, which it is hoped will open up new economic development possibilities for Corpus Christi’s harbor.

Once completed, the Harbor Bridge, including connecting roadways, will be 10.36km long, making it the longest cable-stayed bridge in the US and the third longest bridge of its kind in the world. Doka was chosen for the formwork engineering due to its integrated solution covering all phases of the infrastructure project.

The scope of Doka’s part of the project includes two pylons and over 100 piers (with foundations) for the approach roads to the main span. The piers have overall heights of up to 45m and approximately 4.50m pouring height. There are five different types of piers, varying in their external appearance and their execution – solid or hollow cross-sections.

In order to be able to operate the formwork efficiently, the Doka engineers designed a customised steel formwork for each one of the piers. The elements were combined on the outside using the Xclimb 60 automatic climbing formwork and on the inside with the Doka shaft platform. The formwork and platforms were moved as a single unit using the crane.

The new bridge is being constructed using modern bridge-building technology and materials. Once completed it is expected to enjoy a service life of more than 170 years.

The timetable for completion of the Sabah Al Ahmad Corridor infrastructure project in Qatar is demanding: Construction of the transport corridor, which will feature the largest intersection, longest bridge and deepest and longest bidirectional tunnel in Qatar, must be completed in time for the start of the 2022 Football World Cup.

By then, a total of four roads featuring multi-lane motorway bridges will connect the five football stadiums of Doha to the northern and southern areas of the city.

The Al Bustan Street South construction project is one of four parts that make up the infrastructure project and features bridges with a total length of more than 10km. The existing road, which consists of three lanes in each direction, will be extended by one to two lanes on each side, meaning that around 20,000 vehicles will be able to use the corridor every hour compared to 12,000.

As part of a partnership-based cooperation, Hyundai and Peri developed a time-saving engineering solution that could be supplied from a single source using coordinated formwork and scaffolding systems.

They used around 150,000m3 of shoring, 13,000m3 of working scaffold, 13,000m2 of formwork and VST heavy-duty shoring towers to achieve a bridge that consists of an in-situ concrete bridge with 37 piers and a prefabricated concrete bridge with 81 piers. Carrying out the bridge construction work with traffic in full flow posed a significant challenge.

The modular VARIOKIT and PD 8 systems were combined to establish the superstructure formwork for the in-situ concrete bridge. Modifying the systems to accommodate the varying thicknesses of the bridge structure, which ranges from 3.2m to 4.0m.

This was the first deployment of the VARIOKIT VST heavy-duty towers in the Middle East. These were used for the erection of the main bridge and the bridge access roads using prefabricated concrete elements. Using mobile hydraulics, the VST heavy-duty shoring towers were also adjusted steplessly to account for the special geometry of the bridge to transfer the extremely high loads. This helped the formwork process and quickened the construction process.

Bridge projects all around the world are being conceived of and executed that are bigger, will last longer and will accommodate more traffic than ever before. Digital tools are being used to visualize such projects before they get the green-light and these tools are also meaning all stakeholders can view real-time progress and see any issues before they arise.

Talking about the impact of technology on bridges, Acrow’s Sullivan says, “Digital transformation in the industry is driving the increased need for real-time collaboration and enhanced automation to enable quicker, safer, more cost-efficient project delivery. Our clients are looking for us to help them define, design, specify and procure more efficiently and cost-effectively.

“In the future, we expect to see technology continue to contribute to improving bridging attributes such as decreased weight and increased length and strength, and we expect further refined digital monitoring technology, allowing precision measurement of bridge performance in real time. We also predict an increased use of data analytics to better inform bridge design and engineering and to continue to drive the need for high-quality, high-performance modular bridging.”