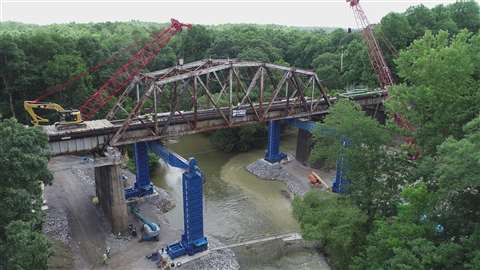 Specialist contractor Burkhalter used an Enerpac hydraulic jack up lifting system in a project to replace a 500 tonne steel railway bridge across a river in the USA.

The old Elvira bridge carried two tracks and was built in 1906. Its replacement was a single track ballasted superstructure. The method used by Burkhalter (recently acquired by Barnhart) allowed the railway bridge span to be set in place while lowering the old bridge, all in one operation.

Challenges started with the location of the bridge - over a river with a strong current and used by kayakers and rafters. Safety was a primary concern so a plan was devised to build the new bridge in a position where it could best be moved into position.

The JS-750 is a multi-point hydraulic lifting system with incremental stage lifting. Each jack up unit frame has four hydraulic cylinders, one in each corner. They synchronously lift and stack steel barrels to form lifting towers. For this bridge job a pair of jack system towers were set on each side of the river.

In a clever move, the new span was transported across the old bridge on Goldhofer self propelled modular transporter (SPMT) type E-Steer. Its steering system with a 90 degree travel angle allowed transverse movement to get the track on the bank and the bridge lined up. Before carrying the new span across the old bridge mats were laid all the way across to evenly distribute weight.

Having positioned the span using the SPMT its hydraulic suspension was used to transfer the weight of the new bridge onto the old one. Underneath were the four jacking towers. To line up the new with the old the jacks were used to side shift both spans. When aligned the bridges were lowered and the old one below the new one was lowered further and removed. 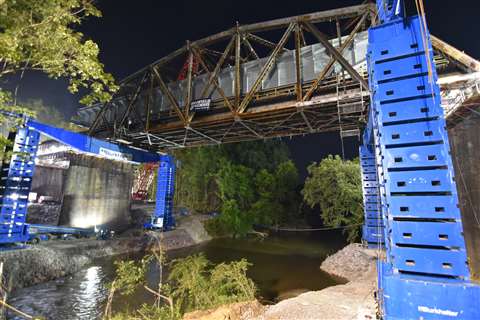 A clever idea was a big help on the Elvira railways bridge replacement project in Alabama, USA 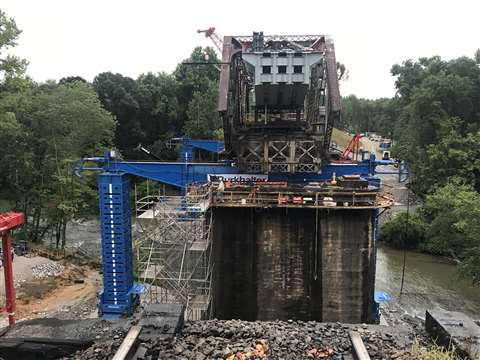