Slowing, and with worse to come 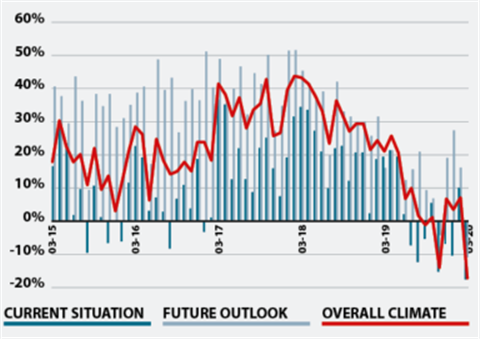 The CE Barometer for the months of February and March make for predictable reading.

In the first two months of the year, sentiment was clearly influenced by the COVID-19 outbreak in China, with its impact on supply chains and the potential for a broader unsettling of the economy.

By March, of course, these concerns had moved much closer to home, and by the time readers in Europe were completing the CE Barometer survey - between 9 and 23 March - the impact was becoming clear.

That means the results for March paint a downbeat picture, with sentiment on the various measures all lower than they had been for many years: since 2014 for current conditions; since 2011 on prospects for a year ahead; and since early 2010 for conditions compared with a year ago.

That all wraps up into an ‘overall climate’ balance of -16.9%, the worse since July 2009, which is saying something.

It is probably not heartening to say so, but the full impact of the COVID-19 crisis was only really dawning when many people responded to the survey before mid-March: the survey in April will likely tell a brutal story.

The survey, which takes just one minute to complete, is open to all construction professionals currently working in Europe.

Full information can be found at www.cebarometer.eu

Though it had been a concern for some time that recession in Europe was on the horizon, following the good business of 2018 and 2019, few would have thought it could be brought on so abruptly.

Europe is not officially in recession, although it is now set to sink into one. Construction analyst Scott Hazleton at IHS Markit, a financial consultancy, said that the outbreak would impact all regions, with US GDP growth falling from 2.1% to 1.8%, and Europe from an already modest 0.9% to close to zero growth.

Hazleton added, “The biggest problem is Europe, which we now think will go into recession.” He did, however, emphasise that the rapidly changing picture on the outbreak made forecasting very difficult.

It’s difficult to predict a pandemic and this is a situation that few of us can ever say we have experience in dealing with; it is a largely unpredictable time. Trying to make some sense of the situation, Chris Sleight, managing director at specialist forecasting company Off-Highway Research suggested that the virus could trigger a short, sharp downturn in construction equipment sales.

Sleight explained, “What we will see as a result of the virus is a sudden dip in sales mid-year”, said Sleight, “but we think it will bounce back and be a temporary thing. We are already seeing stimulus efforts [in China].”

Moving on to CE’s listed equipment manufacturers, during the examined period of weeks six to 13, the CE Equipment Index shrunk by as much as 26.21%. During weeks one to six the sector had shrunk by 3.7%, but a boost was anticipated in May, on the back of the largest planned construction show in the world for 2020, ConExpo.

Of course, there has been no share price boost following the positive company news produced from ConExpo. In fact, the show itself felt rather subdued to many in attendance, with the coronavirus being the most prevalent topic of conversation.

Of all the manufacturers, Manitowoc felt the biggest impact during this period, its share value plummeting by 52.3% after the company shared the news that the coronavirus had begun to impact its global operations and supply chain outside of China.

A statement from Manitowoc said, “The magnitude of the Covid-19 pandemic on Manitowoc’s business, financial position, results of operations and liquidity, which could be material, cannot be reasonably estimated at this time due to the rapid pace of developments associated with the pandemic. Manitowoc’s financial results for 2020 will be determined by the length of time the pandemic continues, its geographic spread, its effect on the demand for our products and services, our supply chain, as well as the effect of governmental regulations imposed in response to the pandemic.”

In light of this, the company has withdrawn its financial outlook for 2020. It stated, however, that it retains a strong financial position, with US$199 million of cash on hand and total liquidity of $445 million at the end of 2019. The company believes it has adequate liquidity to meet its cash requirements over the foreseeable future and remains in close contact with its banking partners. 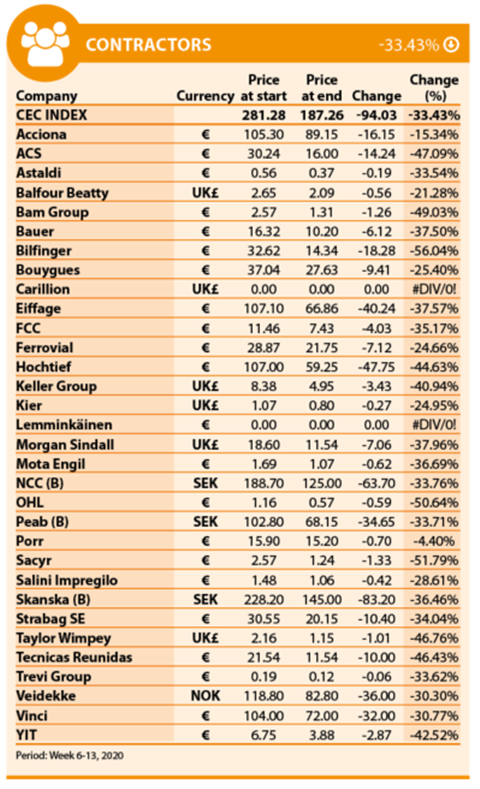 During this period of seven weeks, contractors have had the worst experience of the three groups. The CE Contractor Index figure for weeks six to 13 fell by 33.43%.

It is not surprising that this figure has taken such a blow as global consensus on how best to deal with the virus asks for social distancing and only necessary work to be conducted. Around the world, there are many different attitudes to construction sites remaining open; most employers want to do right by their staff and close; some have supply chain difficulties and others are doing their best to remain in operation, taking all possible safety measures.

Many European contractors have halted work on jobsites, such as Netherlands-based Royal Bam group (-49.03%) halting all activity in Belgium and the UK alongside giants like France-based Vinci (-30.77%), which has ceased all operations on sites in its home country.

The biggest fall in share price for the whole group of listed companies was German contractor Bilfinger (-56.04%). The company announced that as a result of COVID-19 it would postpone its Annual General Meeting (AGM), “In this respect,” the company said, “the protection of the health of shareholders, employees and the service providers involved is given the highest priority.”

The company added that a future date for the AGM therefore depends on the further waves of infection and the preventive measures taken by the authorities. 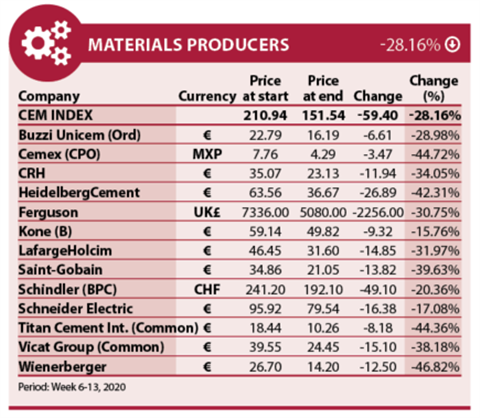 Not escaping the effects of the virus are the material producers who have, across the board, struggled to keep plants open to supply demand, and when plants are open are suffering from a serious lack of demand.

The CE Material Index fell by 28.16% between weeks six and 13. During the period, four material producers fell by more than 40%. Austria-based brick producer Wienerberger suffered the most dramatically, falling by 46.82%.

Commenting on the situation, Wienerberger said, “In these challenging times, reducing health risks and the safety of our employees, customers, partners and all other stakeholders is our top priority. Wienerberger continuously monitors the situation in all markets in order to implement the measures prescribed by the respective governments accordingly.”

In closing, it’s probably not a surprise to hear that not a single company has increased in value over the period.