As 2020 draws closer, companies are generally seeing a solid end to 2019, although there are some major changes in share value. Joe Sargent reports 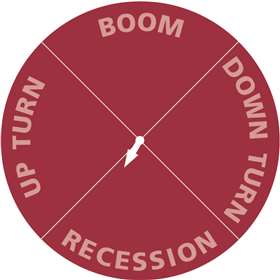 Unquestionably, we are headed for a slower economic period in the coming months as survey respondents in the industry share news of falling activity in the current period and expectations of even worse activity in a year’s time.

A balance figure of -15.3% for month-on-month comparison demonstrates that activity was in fact worse during November than it was during October. This figure falls in line with a feeling of negativity from respondents. Some attribute this slowdown to falling demand creating a knock-on effect to tenders. Growing competition is said to only worsen the matter.

When comparing the present climate with activity a year ago – last month, a balance figure of -9.6% represented a solid slowdown.

This month’s balance figure of -23.6% cements the stance that activity in the industry is clearly dipping.

Looking beyond the coming months to next year, for the first time since September 2012, more people have predicted that activity will be worse in a year’s time than those that feel things will improve. The previous survey showed that a balance figure of just over 5% anticipated that activity would be better 12 months down the line. This month a balance figure of -4.2% anticipated higher activity.

The economy looks as though it has again completed a full cycle, though analysis from industry experts such as Off-Highway Research shows the downturn will be milder than in previous cycles.

The survey, which takes just one minute to complete, is open to all construction professionals currently working in Europe. The CE Barometer survey is open from the 1st to the 15th of each month on our website.

In the December issue of Construction Europe, the period of weeks 42 to 48 have been assessed to determine how the industry is faring at the end of 2019.

During the examined period all three sectors have reflected a growth in their respective index figures. This has led to the CET Index figure representing a positive upswing of 4.36%. 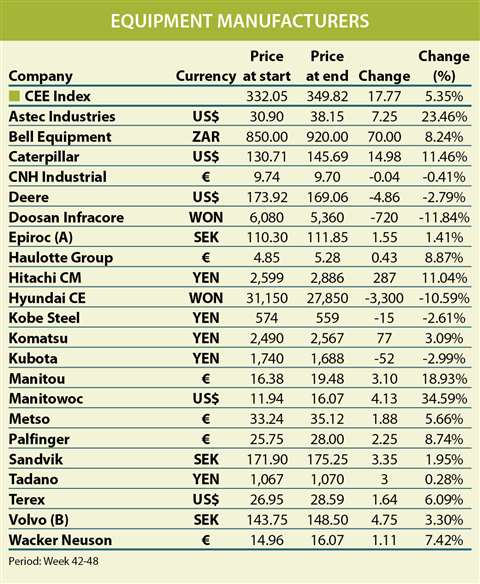 For the listed equipment manufacturers this month, the CEE Index figure saw an increase of 5.35%.

The best performing company in the sector this month was Manitowoc. The US-based crane manufacturer may have seen an approximate 25% drop in value over the year but, in the shorter term, performance between weeks 42 and 48 has shown an improvement, of more than 34%.

In the company’s third-quarter financial results it reported an adjusted EBITDA figure of US$42.8 million (€38.6 million), which it says represents a US$12.3 million (€11.09 million) or 40 % improvement compared with the same period in 2018.

Commenting on the results, Barry Pennypacker, Manitowoc’s president and CEO said, “Our results prove that we can effectively deliver on our commitments despite challenging market conditions.

“Through the transformation of Manitowoc over the past three years, we are better positioned to generate positive returns to our shareholders throughout the cycle, while maintaining adequate liquidity.”

The next best performer was also a US company; Astec Industries, a manufacturer of specialised roadbuilding equipment. The company has made significant growth in share price during the period with its share value is currently 23.6% higher than it was at the beginning of week 42.

Also seeing some resurgence this month is French access platform manufacturer Manitou. The company has seen a recent slump, with its share price falling 22% since August 2019. However, during the six-week assessed period, the company has grown in value by 18.93%.

The worst performing manufacturer this month was Korea-based Doosan Infracore. The plant manufacturer saw its share value fall by 11.84% this month, continuing its overall downward trend for the year.

Fellow Korean company Hyundai Construction Equipment has also seen a short-term fall in share value. The firm may have seen a fairly stable second half to 2019 – following its share value being effectively halved since January this year – but it looks as though the company may be sliding yet further down the stock listings as, during the six-week period, it fell by nearly 10.6%.

In the material producing sector, the general trend for share value was a positive one. The CEM Index figure grew by 4.73% this month as ten of the 13 listed materials companies increased in price during the examined period.

The best performing material producer this month was Irish firm CRH. The company has been growing consistently throughout the year, with an increase in share value of almost 30% since January. During weeks 42-48 the company’s stock grew by 9.14%.

CRH posted a total sales revenue figure for 2018 of €26.8 billion. During November, the company announced that its arranged divestment of its European distribution business had been completed for an enterprise value of €1.64 billion in cash.

The second-best performer in the sector was German Schindler group. With an increase in share price of over 7.6%, the company looks to be making a steady climb in share value following a generally positive pattern since early April this year.

The third-best performer was Finnish engineering firm Kone with an increase of 7.4%.

The worst performing material company was Mexico-based Cemex (-5.43%). The Cemex group made sales of some of its German aggregate assets earlier this year and in November announced the planned divestment of its Kentucky cement plant, from which the company is to receive €449.7 million.

In the contractor segment this month, the market was a little more mixed, with 17 contractors seeing share price growth, but as many as 13 suffering declining values. The CEC Index figure indicates a small growth for those in the trade with a 2.37% increase in the six-week period.

The best performing company was UK-based Keller group, following the firm’s reports that it expects its 2019 financial performance to fall in line with market expectations. The company said that its North American businesses were faring well as a result of increased momentum during the fourth quarter.

The firm did say, however, that trading in Europe, the Middle East and Africa was currently a mixed affair. Despite this, the company reports that “good progress” is being made within its European businesses, with particularly strong performances from southeast and central Europe.

Norwegian Veidekke was the next best performing company in the group of listed contractors. The Scandinavian business grew in valuation by over 17% in the six weeks. German contractor Bilfinger was not far behind as the company saw its stock price increase by over 16.6%.

Three contractors this month had share performances that reflected greater falls in value than any company’s growth in the segment; Trevi group, Porr and NCC.

Italian firm Trevi group suffered the worst drop in share price, falling by 37.05%. Trevi is eager to undertake a restructuring of its business. However, an Italian court recently rejected the proposal presented by the company, concerning the latest restructuring agreement reached with creditors. Trevi has announced that it will appeal the decision.