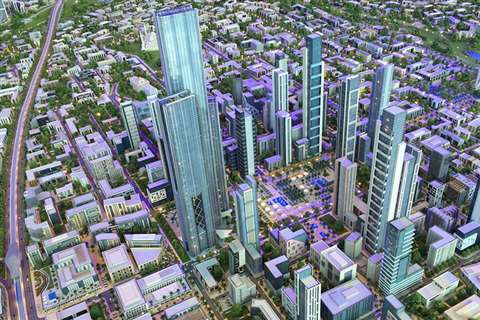 Model of the New Cairo project, for which CSCEC is set to build the central buisness district

After pulling out of a similar deal earlier in the year, state-owned China State Construction Engineering Corporation (CSCEC) has signed a contract worth US$3 billion to build the central business district of a planned new administrative capital east of Cairo, Egypt.

As part of the New Cairo mega-scheme, CSCEC has agreed to build a 345m-high skyscraper, which is set to be Africa’s tallest building. The company will also construct 12 business complexes, five residential buildings and two hotels over half a square kilometre.

In total, the new capital will cover an area of 50km.

At the start of 2017, CSCEC withdrew from a $3 billion contract to build offices in the new capital as a result of disagreements about costs. An agreement between the Egyptian government and the International Monetary Fund to float the Egyptian pound in return for a $12 billion bail-out towards the end of last year caused the currency to depreciate in value dramatically, pushing construction costs up.

However, the fact that CSCEC has re-entered the megaproject signals its diplomatic importance to China.

Song Aiguo, China’s ambassador to Egypt, was present at the signing and said that it was part of the co-operation between the two countries within the framework of China’s One Belt, One Road initiative.