Demolition: Bringing the house down 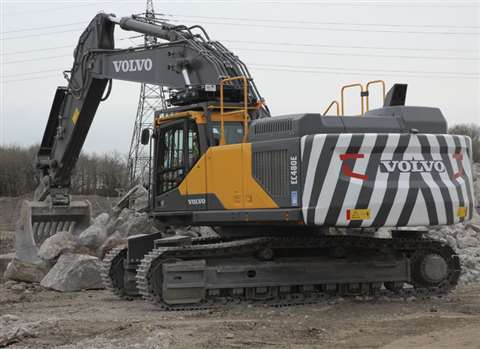 New machines and innovations are constantly being added to the demolition world, and one of the latest is from Red Rhino, which has now fitted its 7000 mini crusher with a Deutz 2.9TCD L4 four cylinder, turbocharged common rail, water-cooled diesel delivering 55.4 kW that meets European Stage IIIB emission requirements.

According to Red Rhino, in addition to reduced exhaust emissions, the 7000 offers low running costs, low fuel consumption and a large fuel tank, resulting in longer periods between refuelling.

The crusher rotation can also be reversed using the remote control with all controls apart from tracking duplicated on the control panel of the machine. This enables the operator to clear blockages without leaving the cab.

Komatsu has been developing two versions of its PC800LC-8 that have been factory-modified with additional auxiliary hydraulic circuits and safety valves to be able to mount and use large hydraulic attachments.

One is designed specifically for use with breakers and the other is able to mount large demolition attachments such as shears or crushers.

Komatsu had identified that a number of customers for 50 to 90 tonne carriers had the machines modified by local dealers or other specialists to carry such tools in the demolition and mining sectors. These were frequently one-off solutions.

With a view to ensuring it was meeting its customer’s needs, Komatsu began a PC800LC development programme to establish the best compromise between providing the required performance allied to meeting its own quality standards without interfering with manufacturing efficiency and product lead times. Where the demolition industry is concerned, the ability to wield a large crusher or shear using a factory-approved and fitted machine with the necessary hydraulic functionality is clear.

The model designed to carry and operate a breaker features accumulator installations of both sides of the boom to reduce peak pressure and improve reliability, new boom and arm piping, a filter installation in the boom foot area and a direct return line to the tank for low back pressure, with breaker activation achieved through a pedal in the cab.

JCB has introduced a new Wastemaster wheeled loader, the 22 tonne 457WM, which is the largest in the range. Power comes from a 7.7 litre MTU Stage IV compliant diesel delivering 193kW, up from 186kW on the previous machine – despite having a smaller capacity.

According to the company, the engine delivers this increased power at lower rated engine revolutions, reducing fuel consumption, noise and emissions. JCB has also fine-tuned the match between the engine, the torque converter and transmission to match it with both the standard four-speed and optional five-speed transmissions. JCB claims a fuel efficiency gain of up to 16% as a result.

The 457WM is the first to use the company’s next generation JCB CommandPlus cab. JCB has focused on providing the best in cab comfort. The totally new ROPS (roll over protection structure) has A pillars that have been moved out to the same width as the rear of the cab, providing a larger interior with a panoramic front windscreen.

According to JCB, the most visible change to the 457WM, apart from the new cab, is the adoption of a sloping one-piece engine canopy. This engine cover can be electrically raised away from the cab to provide improved access to the engine and drivetrain for regular maintenance.

The 26 tonne class SK260LC-10/SK260NLC-10 is the latest Kobelco tracked excavator on the European market, powered by a Hino diesel that delivers Stage IV compliance.

Kobelco said that this machine delivered fuel savings of up to 9% in standard work mode, and up to 10% in Eco mode, over the equivalent -9 machine it replaces. In addition, a 5% gain in productivity is possible when in H mode operation.

According to the company, this is largely due to a Kobelco developed engine cooling fan design that requires less operating energy to reduce the engine workload.

Compliance to the latest engine emission regulations is achieved through the use of a Diesel Oxidisation Catalyst (DOC) in conjunction with Selective Catalytic Reduction (SCR) and a Diesel Particulate Filter (DPF). Together these reduce the amount of DEF/AdBlue fluid consumption used in the post-exhaust gas system, which also dramatically reduces the effects of particulate matter discharge and ensures Stage IV emissions regulations are complied with.

The upper deck has a revised layout which is said to allow easy access to the engine compartment, with the machine gaining a cleaner profile. More importantly, from a safety and work point of view, the operator has a clearer view to the right hand side.

The cab has also been revised to include control levers with a lighter feel, a new lock lever and control lever box, and additional air-conditioning vents and revised rear storage tray complement cab comfort.

The new machine features several fuel-saving features, including three power modes – high, standard and economy – that allow the operator to select an engine speed to match the application. In addition, an automatic engine-speed control adjusts engine revolutions per minute to match the machine’s operating load, and an idle shutdown system stops the engine after a pre-set idling interval. These systems are said not only to save fuel, but also reduce emissions and extend service intervals.

The 352F’s hydraulic system is designed with major components in close proximity – an arrangement that allows shorter connecting tubes and hoses to reduce frictional losses and pressure reductions, resulting in reduced loading on the system for added fuel savings. The main control valve is designed to respond proportionally to control-lever movement for precise controllability of hydraulic functions.

Mike Popovich, vice president of sales and marketing for excavators at Gradall, said, “Volvo Penta engines are ideal for us because they’re robust enough to power excavators that work off-highway in tough conditions.”

As well as the complying with the emissions regulations, the company said that an improvement in fuel efficiency of up to 5% could be achieved.

The design of the boom and chassis of the Series V models create a compact, low working profile, allowing machines to work under bridges, in tunnels, beneath trees, and construction and roadside sites without obstructing traffic.

The flagship is a Hitachi 870LCH with a Kocurek-designed three-piece high reach boom. When fitted with a 3m extension piece, the boom can reach to 43m, at which height it can carry 2.3 tonnes, with a maximum outreach of 20m.

It has been joined by a Zaxis 350LC and a Zaxis 170W – both in demolition specification. Central also decided to refresh an older Hitachi ZX850H high reach, including a major overhaul of the running gear, operating gear and a fresh coat of paint.

Central director Ross Craig, who took delivery of the company’s first brand new Hitachi in 2000, said the latest bespoke modifications are a significant step forward in the development of the high reach concept – particularly where the cab is concerned.

Another UK company, Skillings Crushing Co, has added a 48 tonne Volvo EC480E equipped with the Volvo’s full demolition specification, which includes SIPS (side impact protection system) along the superstructure, slew ring guard, a full FOGS (falling object guard structure) over the operator’s cab, and guarding for both the boom and bucket cylinders.

To facilitate the use of hydraulically-operated attachments, the machine also benefits from an optional rotating circuit in addition to the hammer/shear circuit that comes as standard. The EC480E has also been supplied with a hydraulic quick coupler.

There are special protection plates for the tracks that are designed to prevent reinforcement bar damage to the underside of the machine’s superstructure. If a track throws up a length of re-bar, the heavy duty Hardox plates chop it up before it can travel along the top of the tracks.

Skillings’ new EC 480E is fitted with a heavy duty 7m boom and 3.3m dipper arm, and has a digging depth of 7.8m, and a reach of 12.1m with a generous load-over height of 7.5m. Configured in this way, the machine provides a breakout force of 284kN and a tearout force of 220kN.

A second Hyundai 20 tonne R220LC-9A excavator, fitted with a full demolition specification, has joined the fleet of Chris Wright & Sons in Scotland.

It was supplied through dealer Young Plant, which completed the conversion with Hyundai’s own top and front cage protection, fitted by Walkerweld Engineering in Glasgow, and a boxing ring supplied by Cabcare.