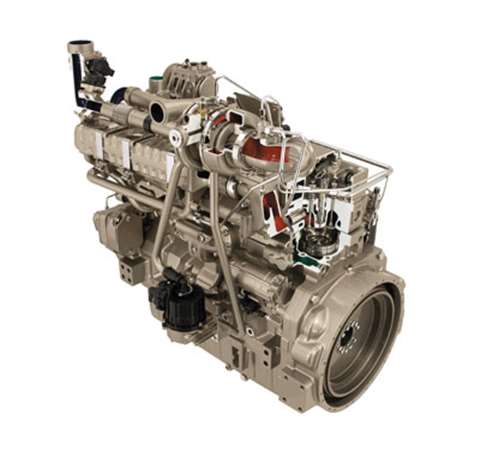 The start of next year will see the first stage in the introduction of the Interim Tier 4 and Stage IIIB engine laws in the US and Europe respectively.

The new legislation covers diesel engines in non-road machinery from 37 to 560 kW, and it will be introduced in three annual steps, based on engine power

The first stage next year will affect a huge range of machinery, mostly at the heavier end of the spectrum.

There will also be an impact on other equipment - large compressors and gensets for example as well as most mobile crushers will all be affected.

The key requirement of the new laws is the reduction of particulate matter (PM) - the black exhaust soot that many people would associate with diesel engines.

However, as well as achieving this, manufacturers also have to maintain the low levels of gaseous pollutants that have been tackled in previous stages and tiers of the legislation.

These have seen significant reductions in carbon monoxide (CO), nitrous oxide (NOx) and hydrocarbon (HC) pollutants from engines. NOx also has to be reduced further as part of the Interim Tier 4/Stage IIIB requirements.

And this is where it gets difficult. The key gaseous pollutant is NOx, which is associated with high combustion temperatures.

The obvious way to tackle this is to reduce combustion temperatures, and this is what many of the Tier 3/Stage IIIA engines have done, with the use of cooled exhaust gas recirculation (EGR) systems.

As the name suggests, these filter off part of the exhaust gas stream, cool it, and feed it back into the combustion chamber to reduce the temperature.

However, the formation of PM is associated with lower combustion temperatures - at higher temperatures these solids burn up.

The most popular solution as far as Interim Tier 4 /Stage IIIB is concerned seems to be the latter route. NOx levels are kept in check in the engine itself, and then a diesel particulate filter (DPF) is put into the exhaust system to remove these solids.

These devices have a honeycomb-like structure that physically traps the particles.

Soot will of course build up over time in the DPF, so it has to be burnt-off. In some applications this regeneration of the DPF will happen as a normal part of the operating cycle. Other applications will require 'active regeneration' of the filter, where fuel is injected to burn the PM away.

The other approach to the new laws is to have a high combustion temperature to keep PM levels below the new requirements. A technology called selective catalytic reduction (SCR) is then used to reduce the high levels of NOx.

This involves injecting a urea solution into the exhaust stream, again in a ceramic honeycomb, which contains the catalyst. The reaction between the urea and NOx reduces the pollutant back to nitrogen and water.

This system obviously requires the machine in question to be fitted with a urea tank, which will need to be periodically refilled, just like the fuel tank.

The only exception to this is JCB, which has achieved compliance for its engines without any after-treatment systems at all.

Alan Tolley, JCB's Director of Engine Programmes, said, "The expectation for the first part of Tier 4 interim/Stage 3B legislation was that to achieve these really low particulate levels you needed to fit a Diesel Particulate Filter (DPF).

"But when you look at that technology for our particular part of the market, namely mid-range construction equipment, we see there are some real disadvantages with that solution, in particular increased fuel consumption through increased back pressure to the engine.

"Also, in many applications load cycles are light and the DPF doesn't self-regenerate so you have to force it to do so and it needs fuel to do it.

"Our strategy therefore has been to meet Tier 4 interim emission standards without a DPF but also to achieve this without any exhaust after-treatment. We have focussed our research and development efforts on a high efficiency combustion system."

There are obvious advantages in this solution, in that there are none of the extra components associated with DPF and SCR systems, which saves on cost as well as space in the machine itself.

The additional cost of new engines with these additional after-treatment systems is of course a concern. It is yet to be seen how this is reflected in the price for equipment, but what the engine producers do say is that there will also be paybacks, with better fuel efficiency and more torque at low revs.

John Deere's manager of product planning , Doug Laudick said, "For Stage IIIB we will provide engines that maintain the levels of low speed torque established with our Stage IIIA Powertech Plus engines."

"Depending on the engine and application, overall fuel economy could improve due to drivetrain optimisation and the engine and vehicle integration," he said.

"The average is in the order of -10%, but even higher savings have been reported. We have also found that an inherent characteristic of our Stage IIIB engines is that operators can get high torque at low revs."

Agco Sisu Power has taken the SCR route to achieve compliance, as has Scania, which also reports a -10% drop in fuel consumption.

Senior vice president Robert Sobocki added, "The cost of urea will have to be added, but our experience is that the total operating costs will be lower than with current Stage IIIA engines," he said.

Another company to go down the SCR route is Volvo Penta, which again has seen fuel savings of the order of -10%. Another positive according to the company is that this system is easier to integrate into machine designs.

Spokesman Darren Tasker said, "In developing the Stage IIIB engines we needed to keep the engine as efficient as possible but also help OEMs with installation. The SCR route will have the minimum impact on end users, which is a key element."

This is a key point - it is one thing to design an engine that meets the legislative requirements, but with all these extra components and systems, it is quite a challenge to then incorporate the engine into a machine. It is an area that Cummins, for example has given a lot of thought to.

Cummins spokesman Steven Nendick said, "The air intake-to-exhaust after treatment system on our QSB3.3 and QSB4.5 engines has been specifically designed for highly flexible machine integration.

"The Cummins compact catalyst can be installed in equipment with space constraints and there is the added flexibility of mounting separately from the exhaust silencer, or as part of a combined catalyst and silencer unit.

"With no impact on equipment operation, the catalyst offers a robust and maintenance free 'fit and forget' system," he said.

Another concern has been the long-term durability of these more complicated engines in the harsh working conditions found on construction sites. It is an area where engine manufacturers have been keen to test their wares and allay any fears.

Product marketing manager at Perkins, Allister Dennis told iC, "We have about 100 Stage IIIB compliant machines operating around the world in field tests and we've carried out installations across a range of equipment including generators, telehandlers, backhoe loaders, wheeled loaders and dozers."

Perkins, like its parent company Caterpillar have gone down the EGR and DPF route for emissions control, and the they cover a huge range of power outputs. Caterpillar's Stage IIIB compliant C13, C15, C18, C27 and C32 Acert units for example cover the 287 to 895 kW range.

"The new package has been extensively tested to provide OEMs with the optimum flexibility for cleaner, more efficient and reliable power."

There is of course an advantage here for companies like Caterpillar, Deere, Volvo and JCB, which build their own diesel engines. It is something that is particularly noticeable with Deere, which started selling Interim Tier 4-compliant machines in the US as early as mid-2010.

Indeed, the company has just secured certification for its 9 litre engines. Mr Laudick said, "The PowerTech PVX and PSX 9.0L engines have already gone through the customer equivalent of nearly 200000 hours of testing.

Field and lab testing continues to ensure the final product will meet the unique requirements expected from off-highway diesel engines."

Deutz has been testing its TCD 6.1 and TCD 7.8 Stage IIIB compliant engines producing above 130 kW in the harshest of environments by conducting trial runs in Kiruna, the northernmost town in Sweden and one of the coldest places in northern Europe.

Spokesman Frank Wesolowski said, "In addition to internal validation involving engines being test run for more than 100000 hours, the Stage IIIB engines are being subjected to a tough programme of field testing.

"We are evaluating the performance under realistic operating conditions and even in freezing cold conditions the new engines have demonstrated outstanding cold start characteristics and particularly smooth running at temperatures of between -22 and -250C."

Field-testing has shown up to a +50% quicker engine response time to dynamic load changes, which Mr Wesolowski said would lead to greater machine productivity. "Field testing has also confirmed that our Stage IIIB engines will offer reductions in fuel consumption of up to -5%," he said.

Volvo has logged over 100000 hours of bench and field-testing of its Stage IIIB engines and has found benefits in productivity and fuel consumption.

Global communications manager Arvid Rinaldo told CE, "Depending on application and machine type, we are using the same displacement as with our Stage IIIA engines, but we're getting greater power and higher torque, which therefore offers greater productivity and efficiency."

Engine producers may have found the technical solutions, and equipment manufacturers may have integrated these new units into their designs. However, what remains to be seen is how the purchase price of new Interim Tier 4/Stage IIIB equipment balances out against the fuel savings these new engines can deliver.

There may also be problems further down the line, as these new machines require ultra low sulphur fuels. That's fine in Europe and the US, the markets where these machines were designed for, but what happens when they are sold as used machines outside of this region?

It could mean expensive problems for unwitting buyers.