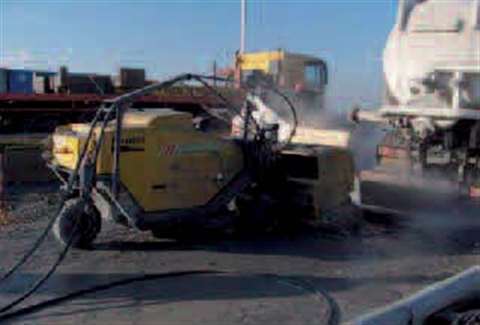 Believed to be one of the heaviest trafficked bridge in Europe with more than 120,000 vehicle movements per day, the 1 km multispan steel box girder Moerdijk Bridge carries the E19/A16 road over Holland's Diep river near Dordrecht in the southern Netherlands.

During routine maintenance, cracking was found in its thin steel deck plate, threatening the structure's integrity, leading to the Dutch Ministry of Transport putting in place a €10.5 million (US$13.8 million) repair and strengthening programme. Cracks were repaired and then a special thin (50– 70 mm) very high strength reinforced concrete overlay wearing course (105 MPa) was applied in a series of 100 m (328 ft) by 8 m (26.5 ft) bays. Unfortunately, just a few weeks after the first northbound carriageway was completed, the overlay started breaking up in two bays, forcing the halting of the work while an investigation looked into the cause of the failure and identified means of repair.

It was found that extensive porosity, honeycombing and voids existed around the reinforcement in the concrete overlay, with some gaps and voids filled with water. Total uniform bonding between the overlay and the steel plate is vital to ensure rigidity. It was decided to reduce the overlap of the reinforcing bars in the two bays by changing from 2 m (6.6 ft) square reinforcing mats to hand laying larger areas, with an increase in mesh size from 50 mm to 75 mm, as well as changing to two layers of 12 mm reinforcing steel instead of three layers of 8 mm in the first coating.

Of course, to do this, the damaged concrete coating had to be removed. Main contractor Haverkort Voormolen first tried to remove the concrete using an excavator fitted with a bucket, but this damaged the steel below, so it was forced to look for an alternative.

Doornbos was contracted to use hydrodemolition techniques to remove the material. A Conjet 322 was brought onto the bridge but proved not to be sufficiently powerful. As a result, Doornbos bought a Conjet 432 specifically for the project and coupled it to two of its 500 hp Hammelmann high pressure pumps to provide a flow rate of 360 litre/min at a pressure of 1,100 bar at the nozzle. Doornbos had to remove 130 m3 of the heavily reinforced high strength material, and managed to remove between 3.5 and 4 m3 per 10 high pressure hours on the thicker areas, rising to 4.5 to 5 m3 per 10 high pressure hours on the thinnest sections.