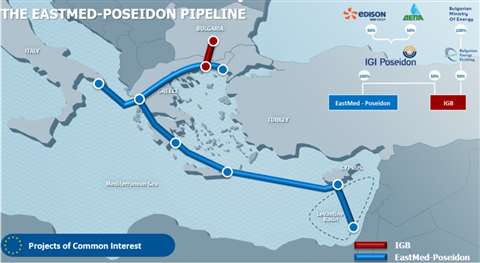 The construction of a pipeline intended to supply natural gas to Europe has been approved by the Israeli government.

The undersea Eastmed pipeline, with a proposed length of approximately 1,900km, and an estimated cost of €6 billion, will transport gas from offshore Israel and Cyprus to Greece and then on to Italy and other European countries.

The pipeline will have an initial capacity of 10 billion m3 of gas a year, but has the potential to double that capacity in its second phase, according to the developer, IGI Poseidon.

Responsibility for its construction will fall to the Public Gas Corporation of Greece (DEPA) and Edison International Holding, as a 50:50 joint venture.

During its construction, some elements of the pipeline will be laid on the seabed at depths of up to 3km.

Israel’s energy minister Yuval Steinitz said, “The government approval of the framework agreement for laying the Israel-Europe natural gas pipeline is another historic milestone for making Israel an energy exporter.”

Together with the energy ministers of Greece and Cyprus, Steinitz is expected to sign the final agreement for pipeline construction to begin in January 2021.

The Eastmed pipeline has been designated a Project of Common Interest by the European Union.