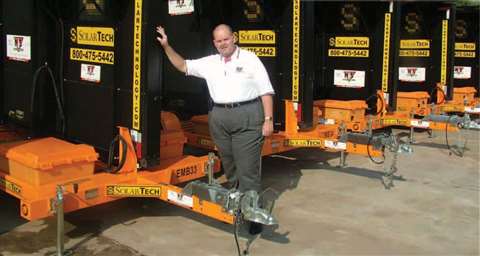 Holes in the ground are an everyday sight on construction jobs, and making holes safer is what National Trench Safety (NTS) does. The Houston-based company rents and sells trench boxes and vertical shores as well as ancillary equipment such as traffic safety signs from ten depots across southwestern US.

NTS president, Ron Chilton, who founded the company in 2004 with five fellow managers from NES Rentals – “We all needed jobs, so we formed the company” – says NTS has a simple goal, to make life easier and more productive for contractors. “Site managers should spend their time in the hole, not in the site hut”, says the former US Marine, speaking to IRN at NTS's head office.

Making life easy translates into a commitment to customer service that goes beyond the norm, and a desire to eliminate rental company practices that were irritating to customers, says Mr Chilton.

One of these was the habit of letting off-rent equipment lie around customer sites. NTS altered its business plan to include more trucks, and NTS now pays as much attention to removing its equipment as delivering it.

The company enjoyed 74% utilisation for the first nine months of 2006, says Mr Chilton, a figure that reflects other efforts to keep trench boxes in the ground.

The company has 67 trucks transporting equipment between depots to meet shifting demand, and to make the deliveries that 75% of its rental contracts require. Two of its 18-wheelers constantly shuttle between Sacramento, California, and Houston, via Phoenix, a distance of 3100 km.

Another irritation for site managers, according to Mr Chilton, is invoices that list rented items in unfamiliar rental company terminology. Such invoices keep them in their site huts figuring out if they actually ordered the item. To solve this problem, NTS's computer systems generate ‘pick and build’ tickets for assembling requested rental kits using listed items that site managers recognise. This invoicing system complements the company's MAS 200 system (ERP software from Sage).

NTS's computer systems are more sophisticated than those used by the top 10 rental firms in US, claims Mr Chilton.

Many rental firms say that customer service is a priority, but Ron Chilton is persuasive in the claims he makes for NTS; “Customer service can be sort of like cotton candy: it looks good, tastes good, but doesn't last very long. Many say they provide it 24-7, but their phone number rings through to an answering machine. Mine rings at home.”

It's a commitment that was recently put to the test when Philadelphia highway and utilities contractor Alex E Paris Contracting Co was replacing a 380 mm, vitrified-clay pipe sewage line under a parking lot of a mall in nearby Mt Lebanon. Paris needed special shoring equipment to dig the required 24 m trench, but with the contract due to start on Friday the shoring from German manufacturer SBH was held up at US customs.

Paris called NTS – which is a SBH dealer – on Tuesday morning. NTS welders worked through the night to fabricate spreaders and loaded four 18-wheelers on Wednesday. After a 1550 km journey, the equipment arrived on Friday morning and was in the ground that afternoon, says Mr Chilton.

The customer care focus extends to offering what might be considered slightly unusual services for a rental company. Its customers commonly use laser surveying tools to establish the proper grade and direction of pipelines. You might think, then, that NTS rents lasers. Actually not, it repairs them, but only for its rental customers.

The laser shop at NTS's Houston depot – established in 2005 at a cost of US$200000 – is not a revenue centre, but rather a “service centre”. It calibrates and repairs customers' laser devices from anywhere in the US, at cost, and does so in days rather than the weeks of other repairers, according to NTS.

Another ancillary service is the free delivery of trench warning signs with every trenching equipment delivery. NTS makes the signs, and will also rent 750 electronic arrow and message boards in its fleet, all of which provide safety and traffic control that necessarily accompany trenches. NTS also repairs these electronic signs. “A lot of companies rent message boards, but not many will work on them. We work on anybody's,” says Mr Chilton.

The business model seems to be working. The company opened its 10th depot, in Dallas, in October, expanding its southwest US area of operations, and Mr Chilton says he has aspirations for a national presence, although being big isn't the main aim. “United Rentals is a fine company with good people”, he says, “It is big and strong. It is like an aircraft carrier; it takes a long time to make a turn. NTS is a PT boat [torpedo patrol boat], fast and nimble.”

NTS is on track to have doubled its fleet for three consecutive years, and will meet Mr Chilton's goal of a dollar and a half of revenue for every dollar invested in assets.

He is clearly happy with the business, and contrasts it favourably with other more complicated equipment, such as aerial platforms; “I buy a trench box for nine to ten thousand dollars, and it rents for $1100 to $1200 per month. It has no batteries, tyres, engine, or hydraulic system. I can get the same rental amount when it is 10 years old as when it was one day old I like my business better.”