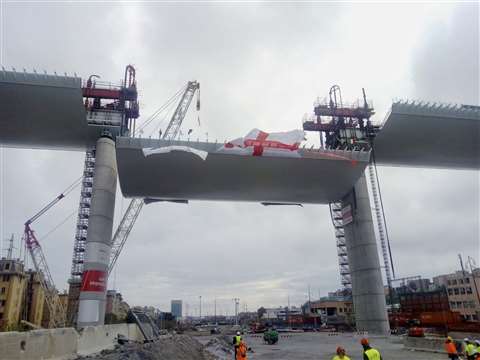 Fagioli installing the final section of the new Genoa Bridge

Fagioli has been involved throughout the replacement process, starting with the demolition. This involved the removal of the collapsed and damaged deck sections and piers. The first new bridge section was installed on 1 October 2019.

Fagioli was contracted by Pergenova S.C.p.A., the consortium established by Fincantieri and Salini Impregilo to design and build the new Polcevera Viaduct on Italy’s A10 motorway. It was done in record time. Fagioli used self propelled modular transporter (SPMT) for the transport to site. Crawler cranes with capacity up to 600 tonnes and a strand jacking system were used for the installation. The three main sections, with spans of 100 metres, weighed up to 2,000 tonnes each.

Another 237 sections, weighing between 56 and 89 tonnes, were also transported by Fagioli, by barge and modular trailers. Those pieces were used to build the viaduct sections.

Support for the bridge is 18 elliptical-section reinforced concrete piers. The dimensions are 9.50 x 4.00 metres and they are the same for the 50 and 100 metre spans. This gave a uniformity to the design, helped speed up and simplify the construction and meant just one type of external formwork was needed.

See a timelapse video of the construction here. 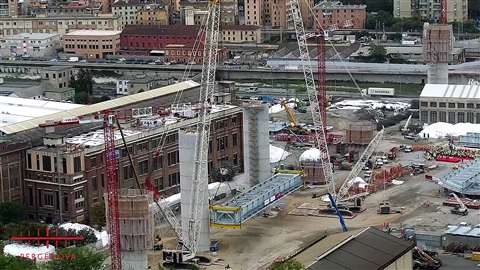