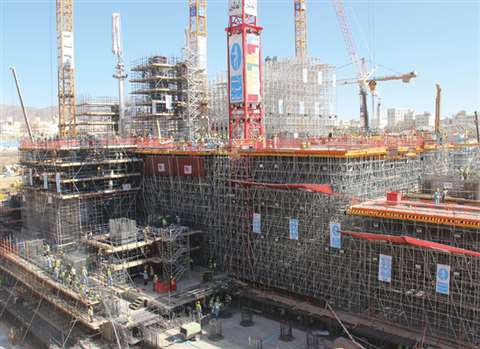 The biggest contract in Pilosio’s history has seen it supply shoring towers and formwork to the expansion of the Prophet’s Mosque in Medina, Saudi Arabia.

Falsework and formwork systems are a crucial tool for building concrete structures of any size. Many of the major suppliers offer engineering and design services along with the ‘hard’ products, and as several current schemes around the world illustrate, these added-value services can not only mean an efficient and safe formwork system, but they can also improve the project timeline.

A particular construction hotspot at the moment is Qatar. Comprising four interchanges and the tallest bridge in Qatar, the US$ 613 million contract for the five-lane, 11 km road and rail Doha bypass is being built by China Harbour Engineering Design and Construction (CHEDC). The contractor is using tens of thousands of tonnes of formwork and shoring from RMD Kwikform for the project’s six bridge structures.

With the largest of the six bridges reaching a height of 33 m and a length of 840 metres, there was a clear requirement for robust and safe formwork, which was both flexible and capable of withstanding the environmental and concrete loading pressures.

CHEDC health safety & environment manager, Eamonn Toland said, “There are four major interchanges on this project, which are critical to its success. From a health and safety perspective, in order to create these structures we had to manage a lot of heavy lifting and working at height tasks, using strict safety controls.

“This is why we engaged with the RMD Kwikform team early on in the project, as the standard of their equipment and processes delivered confidence to the team.

“Throughout the project RMD Kwikform also understood and supported our fast-track field action safety talks, helping to highlight safe working and how to work in changing conditions, looking ahead to identify associated hazards.

“With all of this support, our team developed confidence in the RMD Kwikform equipment, engineering and service, which really helped to deliver the project.”

Once complete the project will help to relieve congestion from Doha, providing much needed relief to the inner city road network.

In the coastal and northern part of Doha, Qatar, a new part of the city is under construction interlaced with waterways and artificial islands.

As part of the Lusail development, the FCC Construction-Petroserv contracting joint venture required a formwork system to construct two pedestrian bridges to link three islands and run around the marina.

It chose Doka to help realise the bridge design, which resembles a necklace with interlocking ellipses and concrete decks suspended by steel cables attached to slender pylons.

The two bridges are 90 m and 100 m long, and are being built simultaneously. The formwork system comprises Staxo 40 load-bearing towers and Top 50 large-area formwork. Dokaplex formwork sheeting will be used to achieve the required fair-faced finish to the concrete decks.

Due to the changing bridge level, the shoring tower has to be adapted for each pour, which Doka says can be done precisely and easily with the Staxo 40 system.

In order to provide for maximum efficiency in terms of construction time, the bridge deck formwork was assembled in advance and delivered ‘just in time’ to the project.

“We are very happy with the pre-assembly of formwork systems. It saves us time and ensures quality. This process made assembling the formwork sheets on the load-bearing tower quick and easy,” said Victor Gomez Lopez, FCC’s construction manager.

When complete, the Lusail urbanisation project will cover some 38 km² area starting at the West Bay Complex Canal north-east of Doha. The 7.5 km long pocket of land will be home to a population of 200,000, offer work for 170,000 people and be able to accommodate 80,000 visitors.

Bam International is building a mixed use development, including the Al Ain Stadium, in Al Ain, a city in the UAE Emirate of Abu Dhabi. The project comprises a 25,000-seat football stadium, a sports centre, a commercial centre, a complex with 700 residential units, two office buildings of 20,000 m², some 50 restaurants and shops, plus a five-star hotel with 172 rooms. The contractor used Meva formwork and engineering services on this technically and logistically demanding job.

MevaDec slab formwork was used to pour the 320 mm thick slabs at heights of over 4 m, and areas as large as 2,150 m² were placed in a single pour.

The system’s drop heads allow for early stripping and fast relocation of the panels and beams for use on the next cycle. Meva said early stripping saves up to 40% on inventory and allows cycles of only three days per slab.

Meanwhile the company’s foldable and moveable CaroFalt system was used for the square and rectangular columns. The formwork has an integrated working platform, access ladder and safety cage, and consists of four identical hinged panels. Once assembled, all accessories remain in position, so the access platform and ladder do not have to be put together and dismantled again and again. Simple inserts can be used to change both the plan dimensions of the column formwork and its height.

All the formwork was faced with Meva’s Alkus plastic sheeting, which has significant advantages in terms of its durability, life and repair-ability over traditional plywood, as well as delivering a high quality surface finish.

Elsewhere in the Middle East, Pilosio says the biggest contract in its history is to supply shoring and formwork systems to the expansion of the Prophet’s Mosque in Medina, Saudi Arabia.

“This contract concerns only the first phase of the project, which will be developed significantly for us until at least 2020” - said Dario Roustayan, the CEO of Pilosio. “Following the airport of Jeddah and the commission in Mecca, the Saudi market is proving once again to be of great importance for our company.” The company is supplying predominantly its MP multidirectional system and type P300 formwork to the building, which will have a floor area of some 650,000 m2 when finished.

So big is the project that Pilosio has a team of engineers dedicated full-time to the scheme to provide technical know-how and liaise with on-site personnel. A key emphasis from the contractor was the speed of mounting and dismantling the equipment as well as easy the handling methods of the shoring systems.

The construction involved first casting the ground floor slab, and then another basement level one some 5.15 m below it. Pilosio proposed the use of a grid of shoring towers – in the end the Multidirectional MP system was chosen – to provide the required 50 kN bearing capacity.

Each tower has been designed to be broken down into at least two parts. The upper part can be removed by leaving the lower support system in place.

Once concrete is cast, the towers can be dismantled in-situ or relocated individually or in groups. The P300 formwork for casting floor slabs is mounted directly on top of the towers.

To contain the casting of the drop beams (3 m height) present in the two floors, standard P300 formwork was chosen, supported directly on the MP towers.

Meanwhile in Germany Peri supplied both formwork and scaffolding for the reconstruction of the City Palace in Berlin. In addition to providing large quantities of wall, column and slab formwork, the company also supported the project with engineering services to help meet the tight construction schedule.

The Berlin City Palace is located on the Spree Island is being reconstructed for the most part according to the old plans. The 180 m long, 120 m wide and 35 m high outer shell as well as the 70 m high cupola roof is in the Baroque style, while the interior of this new landmark exhibition space and library is more contemporary.

The project saw the pouring of 85,000 m³ of concrete and installation of 16,000 tonnes of steel. Over 6,000 m² of Maximo Panel Formwork was in used, and Peri said its one-sided MX tie technology guaranteed significant time savings in shuttering and striking operations.

There is no need for spacer tubes and cones are not required with the Maximo system, which saves on system components as well as time.

Slabs were formed using 10,000 m2 of Skydeck formwork materials, which are of a lightweight aluminium design. The drop head system helps with fast cycle times while reducing the amount of formwork components required. Support for the slab forms was provided by Multiprop aluminium props, supplemented by shoring towers when required.

Peri’s Rundflex circular formwork was used together with FB 180 folding platforms for the circular reinforced concrete walls of the cupola. The final stage of the cupola construction was carried out using Peri Up shoring and working scaffold components.

Contractor OBG is carrying out the work for the client SIDSET, a utility company, and the € 35.4 million
(US$ 40.4 million) plant will serve some 47,000 inhabitants in Grevenmacher when it is complete in 2017.

As part of the design, the basins themselves have rounded internal corners, but for structural reasons, the outer walls are straight lines.

This tricky geometry with an internal cavity was tackled by preassembling the TTR circular trapezoidal girder formwork together with pre-curved reinforcement bars up to 20 mm in diameter.

The TTR and Logo.3 wall formwork had to be installed with minimal tolerances, to comply with the specification for a 50 mm thickness of concrete cover at all points.

Two Logo.3 panels were connected together to allow the
6.05 m high walls to be cast in a single pour, which was well within the 70 kN/m2 capacity of the Logo.3 elements and 60 kN/m2 rating of the TTR system.

Another major structure was the pumping station, which was built some 18 m below ground level.

The outer walls are 60 mm thick and were built without any perpendicular joints. These were cast by first placing 4.75 m high Logo.3 panels to form the outer surface of the walls, before installing the reinforcement, and then the inner formwork panels.

These case studies illustrate that a good formwork solution, backed by engineering services and advice from manufacturers can not only help keep projects on track, but lead to significant innovation, saving time and money.