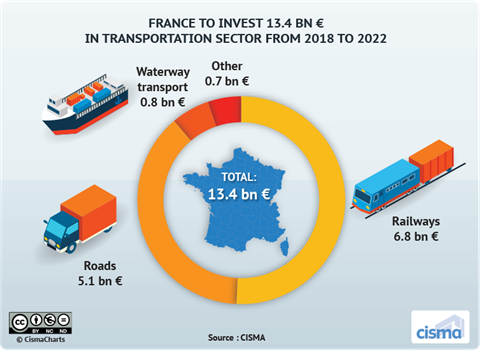 France will invest €13.4 billion in the transport sector from 2018 to 2022, and more than half of this will be for railways, according to CISMA (the French association of equipment manufacturers of construction, infrastructure, steel and handling equipment industries).

It said that the French government had outlined its infrastructure spending priorities for the decade to 2028, and the government programme had an initial budget of €13.4 billion covering the period to 2022.

The allocation for the renovation and construction of roads will be €5.1 billion, but the French government is to prioritise investment at key rail hubs outside Paris. Some 51% of the budget is dedicated to rail spending which is to be focused on the “everyday needs of users”.

SNCF Réseau will undertake “a massive rolling investment” in the existing network with an annual budget of €3.6 billion for 10 years, reported CISMA.

A further €2.6 billion is to be spent on enhancing capacity at key hubs to support greater rail use in cities, improved links to medium-sized towns and improving transport connectivity in semi-rural areas.

The government has set a target of doubling rail’s share for daily journeys in and around the largest urban centres, which CISMA said reflected ambitions already outlined by municipal and regional authorities across France.

While its core focus is on everyday transport, the government is not turning its back on major new rail infrastructure projects between cities.

Further discussions are to be held with the regions to outline the delivery of priority schemes such as the Toulouse to Bordeaux high-speed line. The government said it would also honour its commitments at a European level to the planned new line between Lyon and Turin in Italy.