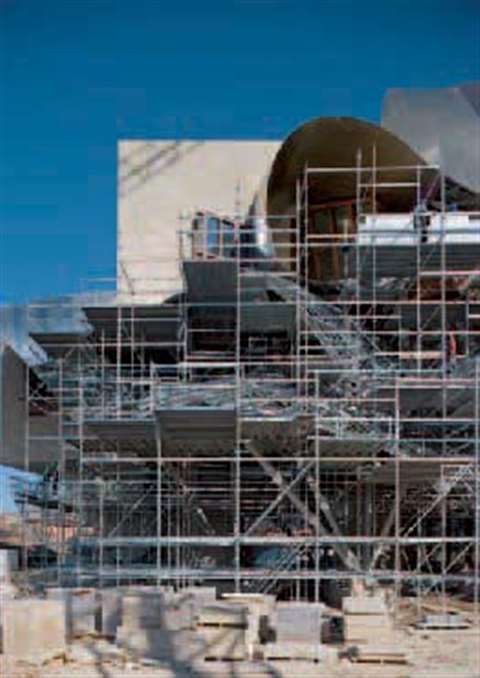 Frank Gehry designed the new luxury Hotel Marques de Riscal in Elciego, Spain. Peri provided its UP Rosett modular scaffold for use during its construction.

The Hotel Marques de Riscal is being constructed in the centre of one of the best known wineries in the Rioja wine growing area of Spain. Designed by Canadian architect Frank Gehry, the hotel consists of several cube structures, pushed into one another.

The building has been under construction over the last two years, with Ferrovial acting as main contractor, working with Umaran S Coop, who is responsible for the roof and façade work.

Peri Spain has provided an integrated formwork and scaffolding solution during the new hotel's construction.

A stable spatial shoring system was assembled using the company's UP Rosett system that was capable of supporting the formwork as well as transferring concrete loads, allowing leg loads of up to 40 kN to be safely carried.

In order to provide access to the elaborate roof, special working platforms had to be installed along the building's longitudinal sides once the concrete work was completed.

The props and girders were assembled from the bottom up and as assembly work on the roof progressed the height of the scaffold kept pace.

A 3D dimensional erection plan created by Peri personnel and the modular nature of the Up Rosett system allowed problem-free erection of the scaffold could take place despite the complex geometry of the building.

Using a 2 x 2 m scaffold grid, the Up decking provided a safe and load bearing working environment for the roof assembly crews at all heights.