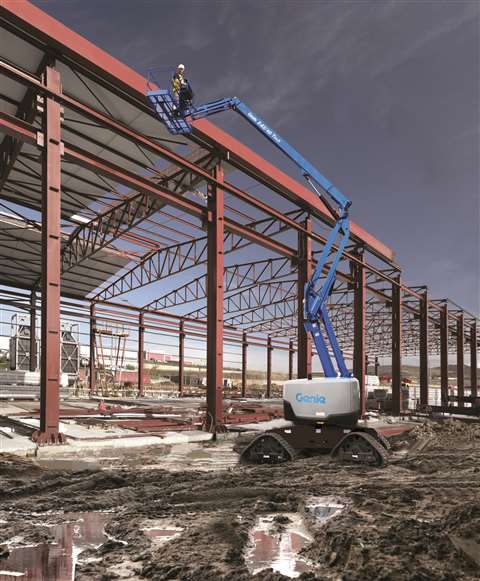 Genie is launching the Z-62/40 TraX in the Europe and Russia region.

Based on the Z-62/40, and previously launched in the US, the articulating Z-62/40 TraX adds to five existing Genie telescopic track-mounted models designed for tough work environments, like the harsh winter conditions and difficult terrain that are common in many northern European countries.

As with the standard model, the 20.87m working height TraX version has a 12.42m horizontal outreach. With this comes an up and over clearance of 7.8m with 227kg capacity. Equipped with a 1.52m jib, offering 135 degree rotation, the lift also offers zero rear tail swing and minimal front turntable tail swing in the stowed position and has a below ground reach of up to 1.68m. The Genie Fast Mast boom system allows operators to descend and retrieve materials and return to working height with just one boom function. Its dual parallelogram lift linkage design allows precise positioning of the platform on the jobsite.

Unlike traditional steel tracked crawler booms, the Genie Z-62/40 TraX can be used in most applications like a wheeled machine allowing operators to maximise utilisation on jobsites, and has wide, rubber tracks for increased flotation and traction, so soft, wet, rough terrain or other sensitive surfaces like turf won’t slow operators down.

The new Deutz 45 kW Stage V engine boasts cooled, external exhaust gas recirculation with turbo-charging. In addition, the solution utilizes easy-to-use new ‘smart regeneration’ technology that proactively monitors the progression of soot build-up in the engine’s DPF. It is designed to alert operators that regeneration is needed, well in advance of the engine requiring it.