Crushing and screening equipment specialist Keestrack has launched its R3e impact crusher at Intermat boosted by the knowledge it has won an international Red Dot Award for design.

The new product was honoured in the Industrial Equipment, Machines and Automation category of the awards. 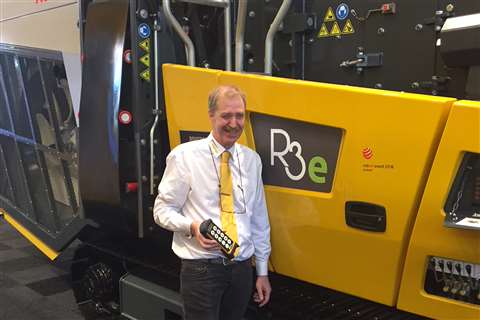 The launch is the result of a two-year project led by Keestrack CEO Kees Hoogendoorn, which started with a 1:20 model presented at Bauma 2016 and continued through comprehensive prototype testing the following year.

In designing the R3e, a major challenge was integrating the fully hybrid electric drive without the heavy operating weight and large transport dimensions of machines in the 30 t class.

Despite the 300 kVA surface mounted generator and two electric motors for the all-electric drive of all machine components from the on-board diesel engine or mains power, the Keestrack R3e weighs 32 t, even when fully equipped.

The development comes as Keestrack announced it is restructuring its French sales and marketing operation, with 10 regional partners supporting the market and working closely with the company’s European headquarters in neighbouring Belgium.

“In recent years, we have not been capitalising enough on the potential in this country, which besides the difficult domestic economic climate has contributed to the not fully satisfactory results of our French operations in the long term,” said global distributor manager Michael Brookshaw.

“Given that other national markets were developing positively in line with our growing product range and customer service offerings, we have taken action in France by fundamentally restructuring our sales and services.

“Not least against the backdrop of the economic upswing, this decision is already bearing fruit today.”