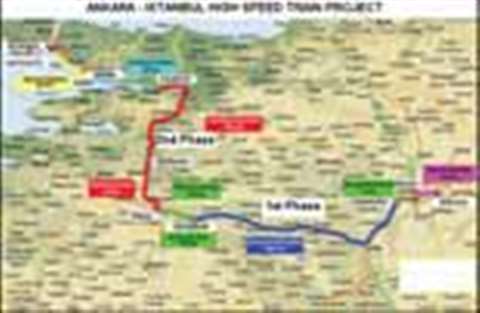 urkish Railways (TCDD) is midway through the initial phase of construction on the country's first high speed railway line, connecting capital city Ankara with Istanbul. As well as serving 17 million people, it is hoped some of the 48 million tonnes of freight carried by road each year will be transferred by rail.

According to Turkey's Ministry of Transport the current mix of roads and conventional railway lines between the two cities are stretched to their limit, with many towns along the corridor suffering acute congestion and pollution.

The original 576 km line between the two cities is single track, except for one 198 km long double section. “This has been a major drawback to the improvement of services and the new line is being built with double track throughout its length. Another drawback of the current rail route is its many tight curves, which have slowed train times. These will not feature on the new electrified line,” says a spokesperson.

TCDD divided the Ankara to Istanbul project into two phases, the first involving the construction of a 251 km fast track between Sincan and Inonu, at a cost of US$ 747 million. The work is being carried out by a consortium led by Spanish company Obrascon-Huarte-Lain and Alsim-Alarako.

Phase one included the construction of Turkey's longest viaduct. Crane service provider CKV-Heavy Lift and Assembly, based in Ankara, was commissioned to place the girders of the viaduct and 13 bridges along the route.

CKV was founded in the 1960s and offers a range of telescopic and lattice boom cranes from 20 tonnes lifting capacity to its largest crane, the 700 tonne capacity Demag AC 700 telescopic hydraulic wheeled mobile.

The second phase of the high speed rail project covers more complex terrain and is being done in two sections. The first section stretches 158 km between Inonu and Kosekoy and includes more than 60 bridges and viaducts. The second phase will be completed by a 56 km section between Kosekoy and Gebze costing $ 2.27 billion. Construction work on this phase is being carried out by CRCC-CMC-CENGIZ INS-IC ICTAS INS consortium

Spanish company CAF is supplying the six-carriage trains, with a 250 km/h maximum speed and 419 passenger capacity. A computer-controlled diagnostic train control and monitoring system is being installed.

Alcatel in France won the contract to equip the new route with $ 80million signalling and communications equipment, including ETCS Level 1 automatic train control.

The entire route will be 533 km long – 43 km shorter than the current link – and will reduce journey time from 6 hours 30 minutes to three hours. “TCDD is also expecting that when the full 533 km route is opened for public trains in 2008, rail transport can increase its share in passenger transport along the corridor from 10 to 78%,” the spokesperson added.

According to the ministry the line is likely to be the first of a series of such high-speed projects in Turkey, with contracts already awarded for a similar Ankara to Konya scheme.