Historic ‘Mexico bridges’ are back where they belong 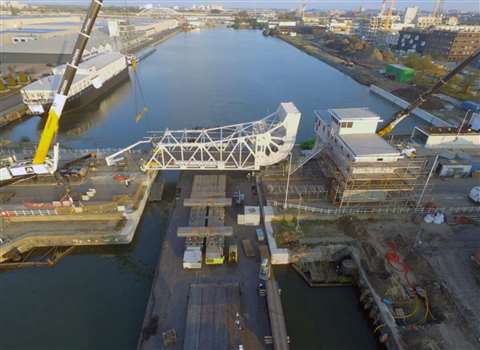 The district Het Eilandje in Antwerp, Belgium is currently being reformed from an old port area to an attractive living and recreation zone and a new tram line is to be installed, which will cross the ‘Mexico bridges’.

The two heritage bridges in Ghent have therefore been renovated. The bridge on the East side will be reserved for the new tramway and the other will be used by road traffic.

In November 2016, Belgian crane company Aertssen Kranen loaded the bridges in Ghent onto pontoons by means of a first set of 24 axles (two sets of 12 lines side by side) of SPMTs (self-propelled modular transporters) and from there sailed to Antwerp. On arrival in Antwerp, the bridges were turned on the deck of the pontoons using the SPMTs.

Following this manoeuvre, the element came across the pontoons and between the abutments. Next, the bridges were put in place using the combination of a Demag AC700 mobile crane and a second set of 12 axles of SPMTs (2 x 6 axles side by side).

Remarkably, the second set of SPMTs is driving on top of the first set to eliminate the difference in height between the pontoon and the quay wall. By lowering the SPMTs hydraulically on one side, and using the mobile crane on the other side, the bridge was put in place on its embankments.