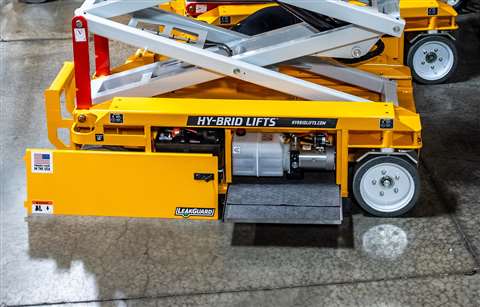 Hy-Brid Lifts has introduced its trademarked LeakGuard integrated system for surface protection, providing 110 percent hydraulic fluid containment. LeakGuard is an option for users versus diapers. The technology allows equipment owners to access more jobs with strict environmental and spillage regulations that require a leak prevention system. The system is made up of one single tray and disposable pads. It will be available on the company’s Pro Series of lifts.

The company will show the system, and its new 19-foot scissor lift, for the first time at The ARA Show, Feb. 10-12 in Orlando.

“Our customers were asking for a way to more effectively prevent potential hydraulic fluid damage to surfaces, so we made it happen,” said Terry Dolan, Hy-Brid Lifts’ president and CEO. “The integrated system features an intuitive, single-tray design, making things even easier for operators. LeakGuard will open doors to more opportunities by allowing contractors to get on highly regulated jobsites they may not have previously had access to.”

The system consists of a stainless-steel tray and disposable pads. The tray sits under the hydraulic pump in the base of the lift and extends under the scissor stack. The tray can be accessed by opening the cover on the pump side. “The system is easy to check for leaks, and in the unlikely event of a leak, the pad changeout process is simple and doesn’t take much time,” the company stated. “Unlike competitive models that require three or four trays to be emptied, the LeakGuard system contains all fluid in one place, which saves time and prevents messy spills. Additionally, if the lift cylinder leaks, the hydraulic fluid will drip onto a tapered cover under the scissors which captures the oil.”

To equip any of the Pro Series units with LeakGuard, the pan and pads can be purchased with the lift or added in the future without the need for modifications. Hy-Brid Lifts will also offer packs of replacement pads for customers to purchase in the future.