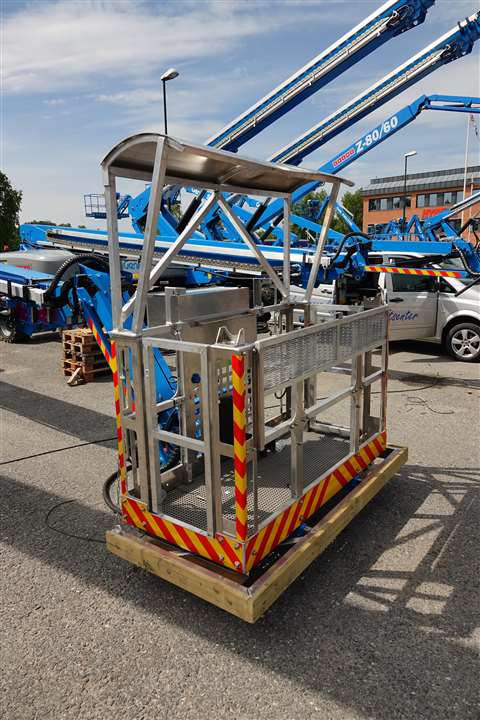 Norway-based Hybeko has introduced the RS-85 XC boom lift; the first machine of its kind in Europe to receive CE approval for rock scaling applications

Key features include a customised aluminium basket with protective roof and drill attachment, integrated power hoses within the unit’s telescopic boom, an integrated generator and compressor tow bar. The first six units were purchased in the third quarter of this year by two Norwegian rental companies, Høyde-Teknikk and Drammen Lift, and end-user company Mesta.

The first step in all rock stabilisation tasks, rock scaling generally refers to the removal of loose rock, brush and trees on a slope or cliff. It is a practice commonly required, among others, for security reasons on rock cuts above highways, railways, walking trails and hydro dams. 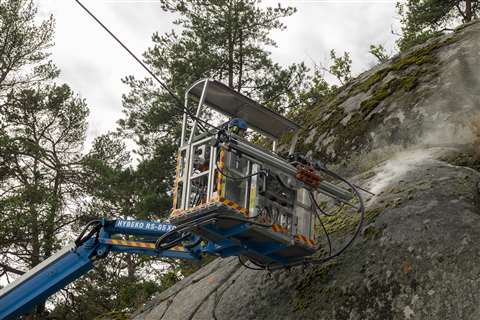 While some slopes require annual scaling, others may be good for many years after a thorough scale. Often performed by hand, using a scaling bar or drills, among other techniques, aerial work platforms are also employed in rock-scaling applications.

Being such a mountainous country, Norway has few roads and highways that are not cut directly into the sides of mountains. As a result, rock scaling is a common, yet risky practice, which is often carried out with the help of MEWPS. However, as Hybeko chief executive Espen Johannessen explained, “As far as we could see it, none of the boom lifts appeared to be purpose-designed with the right specifications, nor officially approved for the job by a certified body.”

Seeking to find out more, Hybeko approached Gjerden Fjellsikring, a local company with a long experience in rock scaling work. “It was clear that there was a real need for a machine that would offer operators better protection. At the same time, there was also the question of productivity and a machine that would allow the use of the appropriate heavy drilling tools,” said Johannessen.

Thanks to its reinforced boom adapted to increased lift capabilities, 26m (85 ft) working height and 22.71m (74 ft) horizontal outreach, the Genie S-85 XC boom lift was chosen as the base unit for the project.

“The project took us about two years from engineering to testing and receiving the CE approval through Rambøll,” said Johannessen. “In addition to taking operator safety to a significantly higher level, we are also proud to offer customers the first and only CE-approved solution that, according to our tests and feedback from our first customers, multiplies productivity by three. We thank Høyde-Teknikk, Drammen Lift and Mesta for their confidence, and hope that our RS-85 XC boom will give them the competitive edge that we all need during these challenging times.”