More than 330 industry professionals gathered on 6 March 2019 in Dubai, UAE, to honour the winners of the International Awards for Powered Access (IAPAs). Jointly organised by Access International and IPAF, the IAPAs celebrate best practice and excellence in the powered access industry, and this was the first time the event was held in the Middle East.

The audience at the Raddison Blu Deira Creek Hotel were also the first to learn the next edition of the awards ceremony will be returning to the UK for the first time since 2017 and will be held in London on 23 April 2020. 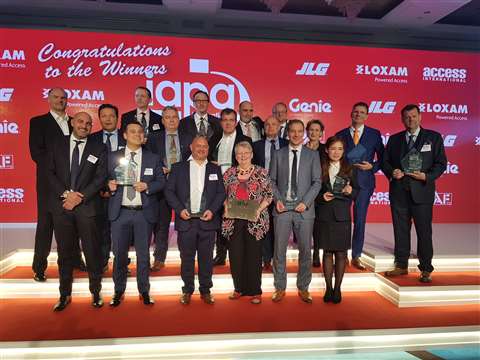 In a change to the usual proceedings, the IPAF President’s Award was announced during the IAPAs ceremony, Immediate Past President Nick Selley making Jean Harrison, IPAF Membership Officer & Event Coordinator, his choice for her sterling contribution to the federation in a variety of roles over more than 25 years.

The full list of 2019 IAPA winners, and judges’ comments, is as follows:

“He has had a positive impact on many people and is committed to the cause of training and safety. His involvement with IPAF shows his engagement with the industry’s future.”

“Their facilities are exceptional, and they are actively involved in developing relevant safety products.”

Product of the Year – Mast Climbing Work Platforms/Hoists: ALIMAK for its Mammoth TM

“This inspired product offers multiple ways to carry material and personnel and has the capacity to transport large machines and materials.”

Product of the Year – Vehicle/trailer-mounted: BRONTO SKYLIFT, FINLAND, for its S35EM truck

Judges praised “the platform’s capability to carry out a wide range of jobs despite its compact size. It also has an impressive outreach of 29 metres.”

Product of the Year – Scissor Lifts and Vertical Masts: HYBEKO for its Tunnel 3390 RT scissor lift

“This is a unique machine, based on a Genie GT-3390 RT scissor, but adapted for the particular demands of tunnel work. It creates a machine that helps contractors work safely and productively on challenging sites.”

The judges complimented “the machine’s great versatility and attention to operator safety. For a boom lift it has exceptional capability to operate on a slope.”

“Jason Anker, through his company Proud2bSafe, is having a major impact on how people understand safety. He makes safety feel personal.”

“Since 2005 Dingli’s influence has grown worldwide. Its growth in its home market of China has placed it at the centre of efforts to introduce modern access equipment, improving safety for countless workers on site.”

Digital Development: JLG INDUSTRIES, US, for its BIM library

“JLG has been leading the way in the creation of BIM models of mobile elevating work platforms. It offers the real prospect of benefits in productivity and safety planning.”

“A-Plant isn’t just a fast-growing company with an impressive financial performance, it also has a customer and industry-focused approach and tries to make improvements to the industry as a whole.”

Innovative Technology: SKYJACK, CANADA, for its Elevate On App

“This mobile phone App is part of Skyjack’s Elevate package and provides operators with a paperless working environment on site and is making a real difference for equipment users.”

Tim Whiteman, CEO & MD of IPAF, spoke about this award recipient ahead of the awards ceremony proper getting underway, saying: “The Lifetime Achievement Award is designed to celebrate a person who has made a significant impact on our industry. There can be no doubt that our recipient this year – John L Grove, who is honoured posthumously – is richly deserving.

“His name is synonymous with access and cranes. He was the co-founder of two of the most famous American crane and access manufacturing companies. He created Grove cranes in 1947 – at the age of 26! – and in 1969 was co-founder of JLG Industries, which quickly became a pioneer in boom and scissor production. By the time he retired from JLG in 1993 it had become a world-leader in aerial platform manufacturing.

“He was a passionate engineer, endlessly creative, and the holder of 60 patents at the time of his death in 2003.”

The judges said: “He’s a legendary figure in the industry and played a key role in the inception of the platform access business. As 2019 sees the 50th anniversary of JLG, now feels timely to award this long over-due accolade.”

The independent, impartial judging panel spent a full day considering the more than 100 entries received. The judges made decisions based on the merit of each entry and were excluded from entering their company for any award. The 2019 judges were: