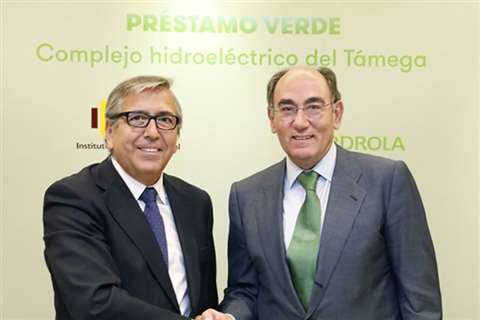 The ICO granted the funds - representing its largest ever Green Loan offering - after an independent agency, VigeoEiris, verified the project complied with its Green Loan Principles.

The loan, which has a 12-year repayment period, was signed by Iberdrola chairman Ignacio Galán and ICO chairman José Carlos Garcia de Quevedo at Iberdrola’s headquarters in Madrid, Spain.

Located in northern Portugal, the Tâmega scheme comprises three new power plants to be constructed over the Tâmega River. Iberdrola said the flagship project would require a total investment of more than €1.5 billion.

The three hydroelectric power plants, Gouvaes, Daivoes and Alto Tâmega, are expected to produce 1,766 GWh of power a year. The company said it was enough to meet the energy needs of the 440,000 neighbouring homes.

With 40% of construction already finished, the project is scheduled for completion in 2023.