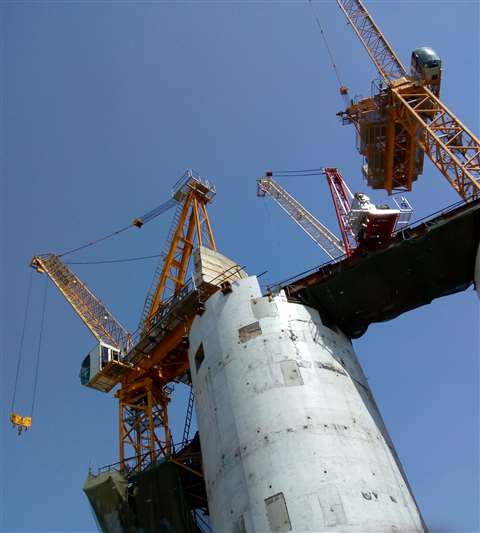 L&T Potain towers on the Statue of Unity in India

The US$470 million Statue of Unity under construction in the Indian state of Gujarat will be 182 metres tall. It is a monument dedicated to Sardar Vallabhabhai Patel, a leader on the road to India’s independence before becoming the country’s first deputy prime minister. He was known as the Iron Man of India.

L&T chose three 20 tonne capacity Potain MR 295 H20 luffing jib towers and a 10 tonne MC 205 B saddle jib tower crane for the job, which has already been running for a couple of years. The 20 tonne luffer is especially good for work in confined space, Potain said.

The MR 295 is a mid-size model designed to have a compact counter jib. It had the required free standing height, as well as the right capacity and working envelope for this project, the manufacturer continued. Capacity at the end of the maximum 60 m jib is 2.7 tonnes and on this job they have 50 m jibs. The MC 205 B lifts 2.4 tonnes at the end of its 60 m jib, which is the maximum for this model.

Loads for both cranes include rebar, concrete and steel, and also assembling the bronze fixtures for the outer cladding. Material in the structure includes 5,600 tonnes of steel and 66,000 tonnes of concrete. Cladding the structure will be 1,900 tonnes of bronze. Completion is due in October 2018.