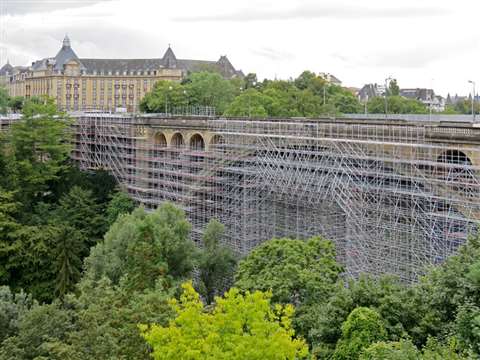 Layer scaffolding at the Adolphe Bridge in Luxembourg.

Constructing the scaffolding for refurbishment of the Adolphe Bridge in Luxembourg presented the erectors with a number of challenges.

Heavy traffic put a major strain on the more than 100 years old landmark - named after the Grand Duke Adolphe and the largest bridge in the world when it was built, with a span of 85 m. Up to 2000 cars and 150 buses and coaches are driven on the structure every hour.

A combination of Allround Scaffolding and Allround Lightweight from Layher was used. The main arches of the bridge are being permanently reinforced and the road surface removed, restored and widened in conformity with UNESCO requirements for preserving the architecture as designed and implemented by the French engineer Paul Séjourné.

Load class 4 scaffolding was used and fitted to the structural shape of the bridge. Also, it was decided to restore the aesthetics of the bridge, known locally as the Nei Bréck, to their former splendour by 2016.

Two passageways were required for pedestrians and vehicles. A big advantage here was compatibility with the Allround system, said the manufacturer, due to the extensive range of components that are easily attached.

For the bridging structures, the scaffolding erectors selected Allround lattice beams and strengthening using a diagonal brace to transmit the loads in lateral supports made of grouped standards. And an Allround platform stairway tower provided safer access to the site.

A tarpaulin was fitted to protect pedestrians from noise, dust and falling stone with an attractive appearance when seen from the city.