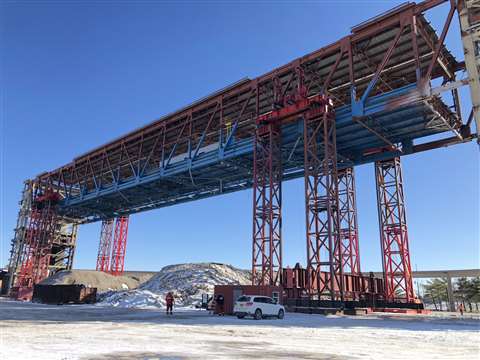 The 2,250 tonne, 134 metre main truss of the Joe Louis Arena was lowered from an elevation of 25 metres to 6 metres

A project to redevelop riverside land in the USA received assistance from Mammoet to lower the 134 metre long main truss of a redundant sports arena and complete its demolition.

The Joe Louis hockey arena is in the centre of downtown Detroit, Michigan, close to the USA-Canada border. What made the job tricky was its proximity to a metro centre and a large sewer main ran underground beneath the truss. It meant the demolition was a dismantling process rather than a traditional implosion.

Incorporated into the truss was the arena’s penthouse, helping to make it the largest component on the job. It was also the last to be removed. The original proposal was to take the steel and concrete truss apart a beam at a time.

Working for locally-based demolition contractor Adamo Group, Mammoet’s solution was to lower the entire truss in one piece for easier access to be dismantled on the ground. Another challenge in this approach was a narrow weather window due to the load’s large sail area.

Large beams were inserted under the truss so it could be lifted from its existing supports using eight strand jacks and then lowered onto supports. The truss was 25 metres up and Mammoet lowered it to 6 metres for cutting into more manageable chunks. Prior to the lift and lower operation two pairs of 2.4 metre tall girders, braced together, were put in to support the roof. 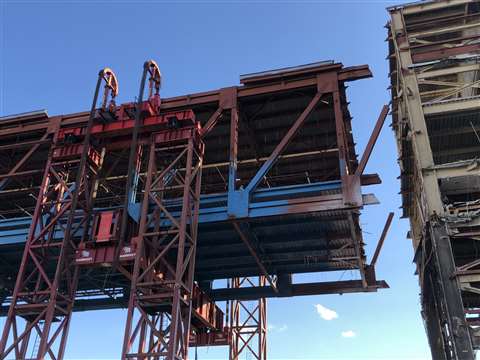 Without an accurate determination of the weight of the truss, it was lifted free in a way that would have allowed it to be put back had it been too heavy. On the day of the lift its weight was deemed acceptable so the ends were removed to allow it to be lowered past the original supports.

Multiple strand jacks on the one rigid structure demanded careful monitoring of the load on each jack to make sure the truss and the lifting equipment were loaded as designed. Within four hours of starting to lower, the Mammoet team of six had it lowered and set on the client’s shoring piles.

Richard Adamo, Adamo Group president, said, “I would recommend Mammoet to other contractors as they display real professionalism on the job. The team is very engaged and willing to overcome obstacles collectively and come up with solutions. With safety being of paramount importance on this project, and sensitive in nature due to the close watch of the public’s eye, Mammoet took all necessary precautions. It was a wonderful experience working alongside this team.”