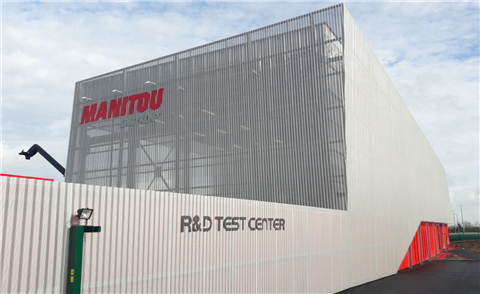 Manitou has inaugurated its new research and development test center. The innovative building makes it possible to perform endurance and durability tests on all Manitou prototypes.

The center, debuted in the presence of a number of elected officials, is designed to assess the endurance and capacities of the group’s prototypes. ”With a number of particularly innovative, high-performance test benches, the models are put to the test for cycles that can last up to several thousand hours, the equivalent of the average life span of a machine,” Manitou said. “The tests guarantee the robustness of Manitou products from launch while reducing the development turnaround times. Several test robots and driving tests feature in multiple configurations among the tests performed. The test benches also make it possible to analyze the resistance of the major parts and a number of other types of components.”

Launched in the month of May 2017, the work, representing an investment of 1.5 million euros, was finished in January, 2018. The new space includes a driving circuit and an RT 2012-certified building. The facility employs 16 people.

Jean-Yves Augé, R&D director of Manitou, explained the purpose of such a project: “By automating the various test phases, we are able to accelerate the evaluations on our machines to provide our users with ever more reliability. This is about certifying the capacity and endurance of all our ranges and our future innovative products. We are fully involved in continuous improvement.”